Over the past few months I highlighted why the MMI+GOOG merger would force Google to improve its margins.  On this front, Google is not disappointing.  Over the past few quarters, Google has expanded its overall margins by 4-5 basis points. Basically, half way to completely mitigate any margin hit from the MMI merger. (And that is assuming they do no cost controls at MMI. Which is a very conservative assumption given how proactive management is acting, and the given trend of the industry. A trait many pundits are choosing to ignore.) 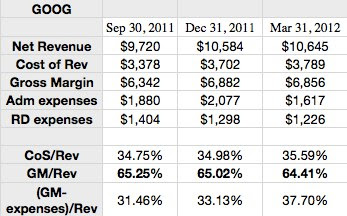 Since the Sept 2011 quarter, Google has raised their margins by 6.24%.  At the moment it is in-line with Apple's margins.  Obviously there is still more cost cutting to do, and on the MMI side there is a lot of low hanging fruit that they can easily streamline and cut, as highlighted in the link above.

Basically, I am arguing that the MMI+GOOG merger is no longer an issue with respect to margins. Once they merge, given the current margin trend at Google alone, margins will approach 31%. Effectively wiping out the margin concern.

Instead pundits with a large soap box, like Cramer-Lee-Faber, just point to a superficial bashing of a conference call due to its "broadway" style.  Based on the above data, I would argue analysts did not praise Google enough! And I wish during the morning crowing about Google, one of these Ivy League grads would have been nice enough to mention actual data, instead of their "feelings" and the 1 metric everyone knew was going to be bad. (I expect more from CNBC, especially given their soap box.)


Anyway, this is the nature of the street. People do not see things until they want to see things.

Yesterday, investors did not want to see the mitigated risk of the MMI acquisition, and they do not want to acknowledge a proactive trend within management.

1. Search is changing. Management is changing Google to reflect this BEFORE the industry forces them to change. Search is becoming more of an answer engine. Google defines this change with the term 'semantic' search. This morphing has been in the works for a better part of a year.

2. Social. The social effect is probably going to effect 10-20% of overall searches, but Google does not want to be left out of that 20%! So they are going to compete BEFORE Facebook or FourSquare forces their hand to compete. (People may not like it, and at the moment a true argument can be made about personal data protection, but this will be a market and Google is simply not going to cede it to another player.

3. Mobile. This can and will effectively combine the two shifts in search. Obviously Google is knee deep in mobile. They have a bunch of inefficiencies to work out (to better compete with iOS), but the feedback I am getting from Google Play, and over-the-air syncing is actually pretty good.  And with lower priced tablets coming online with Android 4.0, Google is still in a very good position to be #2 in the mobile space. (I have a hard time seeing anyone really competing with Apple and Google in mobile. Other players are simply too reactive in relation to these two proactive management teams.)

IMO, the data speaks for itself. Pundits are choosing to ignore tangible proactive trends to better compete. Instead they would rather spew out superficial analysis and speculative threats to a business (which ALWAYS exist).
Posted by echotoall at 9:38 AM