no more mo'mo boys for AAPL?

Looks like the momentum players have left Apple. At least for now. Amazingly enough, the current oversold position is the most it has been in the last 3 months. 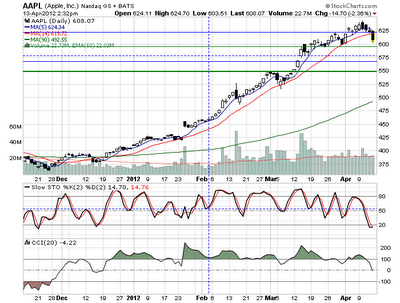 Seems like an interesting area (around 600) to enter an initial position, assuming anyone wants to position themselves in Apple prior to earnings. (Although any sane chartist would tell you that the SMA trend is busted, and you should not.)

I do not know if Apple will hiccup this quarter. (I think their margins will take a hit because the new iPad cost will be capture during this recent quarter. How wall street decides to act is another story. Google produced good numbers, but got knocked at the open.)

There have been reports that the institutional investors have been exiting the stock as it passed 600. So theoretically, there is fuel if Apple produces a blow out.

If there is a run up into earnings (meaning the momentum players began re-entering right before earnings), and a minor hiccup (i.e. margin hit or just meeting analyst expectations), we may see similar action as Google is seeing. In this case, I am looking for AAPL to test its 10SMA on the weekly. By next week, the 10SMA should translate to a stock price near 580.

With dividend funds now available to support the stock, Apple should be trading with a trailing multiple around 15-16. (This lower multiple is simply because of its size. As per its growth rate, the multiple should be much higher.)

Current blogger (or independent analyst) estimates are expecting a +30% beat from Apple's own estimates. Analysts estimates are currently 16% above company estimates. Apple should beat analyst estimates, but if the street decides to focus on 1 metric (as they are with Google), then it can still take a hit.
Posted by echotoall at 2:59 PM