Thoughts on the Euro

Over the past few months I have been following the PMI-to-Euro correlation, and the surprising (sarcasm:) correlation suggests a declining Euro helps the PMI. 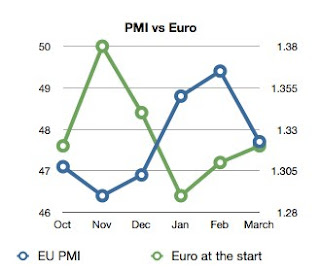 The general movement is with a declining Euro (in relation to the dollar), the Euro zone PMI increased. As the Euro appreciated, the PMI declined. Econ 101 at its finest. (In Feb there was a bit of a fake-out suggesting the Euro Zone might be able to grow even with a Euro/dollar near 1.31, but that was squashed in March.)

The flaw, or lack of information, in the above data point is that the Euro is only in relation to the US dollar. So it is not a complete picture.

A decline in the Euro will have some level of effect on earnings for US based companies from their European business, but that effect should be mitigated by a generally stronger EU economy and active hedging. If the Euro/Dollar repricing happens in a gradual process over a two year period, active hedging should be able to mitigate this risk. If the repricing takes place in an overnight process, someone will take a hit if they are not prepared. But that hit should only be in relation to the Euro, not in relation to other currencies.

A bigger concern I would have with any potential repricing is the effect on the Swiss Franc. The Euro/Franc relation needs to stay at a certain level to not effect certain bond prices. (These bonds are important and can destabilize the EU again.) The SNB has already been saying it will not allow the conversion to surpass 1.20.  But I am sure the SNB will be involved with any overnight repricing efforts.

Generally, I am not too concerned about a gradual depreciation of the currency, so long as markets can adjust to it. (And I am hoping this is what happens.) If there is an overnight pricing, there will be some shock to earnings from the EU zone. But that shock should get mitigated relatively quickly with an improving economy.

As far as the general effect of a stronger dollar to corporate earnings, the dollar (in relation to a basket of currencies) saw some major up/down swings over the last two years, yet corporate profits have still grown quite nicely.