Seemingly over night, some stocks went from an expanded-multiples to contracting-multiples.

QCOM - Probably the most obvious example.  Here is a company at the forefront of the-single-greatest-and-steapest growth curve in human history and is currently trading with a trailing PE of 18.7. The day before they reported earnings QCOM was trading with a trailing PE of 25-26. Within two days of reporting, QCOM saw a 25% reduction in multiple, 25%!

Over the last two years QCOM usually averages a multiple of around 22.  After being at the forefront of the mobile adoption, when the world was about to collapse on itself because of Europe, QCOM's lowest trailing PE was around 18. (chart was from Wolframalpha) 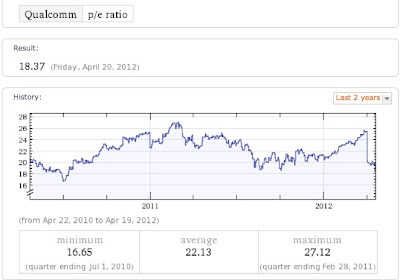 Basically, Mr Market is bracing for a drastic reduction in the adoption of mobile. (Is there anyone in the world that seriously believes mobile adoption is slowing?)

So I ask myself a simple question, does the one company benefiting from mobile adoption and smartphone conversion (regardless of smartphone brand) deserve a valuation similar to when the world was literally going to blow up?

QCOM should be chilling around 66-68, until their margin issue is remedied. (Given the shear force of the macro-trend QCOM is in, 25% reduction in perceived value seems a bit much for a slight hiccup to margins. Especially when that hiccup is caused by increased demand.)

GOOG - Regardless of what the talking heads superficially say about Google, fundamentally, the quarter was not bad. Overall Google did well and properly positioned themselves to be ahead of the game when the MMI acquisition is closed. Curiously enough, Google's price action is not specific to Google. Google reported on Thursday night last week and JPM reported Friday morning of last week.  Both stocks had a price discovery which was basically flat to up prior to the market opening that Friday. But once the market opened, there was only one direction, down. JPM also reported solid quarter and acted and is acting, almost the same way as GOOG.

(On April 16th and 17th JPM traded in sympathy with the sector from positive reports from peers, but once the sentiment ended, the trading went back to mimicking GOOG.)

Basically, Google's decline does not seem to be Google specific. It seems to be a part of a general negative sentiment.  That sentiment has caused Google to trade at a reduced trailing PE. For instance, over the last quarter the lowest trailing PE GOOG achieved was 19, at the weekly 50SMA. Currently Google is trading with a trailing PE of 18.0.

Both Google and QCOM highlight the extreme multiple contraction being seen. It speaks to the very fear of the big-boys.

So when I hear there is complacency in this market, I roll my eyes because the above is evidence that there is no such complacency.  The big boys are scared, and since humans are generally wired to follow patterns, like sell in May and go away, we will follow the most obvious patterns. Especially since the low 10yr yield supports the pattern. (As highlighted in my recent market thought post "jobs, not Europe".)

Of course there is always the caveat, if the next Non-Farm Payroll numbers come in better than expected, and highlight the April number as an anomaly, we are going to see the 10yr treasury yield jump. Then we will see a noticeable shift in sentiment, and the above will change.
Posted by echotoall at 10:01 PM