Before I go into the names below, just wanted to highlight two quick thoughts regarding the market:

1. A distinction between the current pull down vs the previous ones since December is that an argument can be made that some internals are breaking technically.  But this could just be a stalling process.

2. Jim Rogers declares China's property bubble over. No hard landing. Maybe this is the reason materials and oils saw some strength in the AM. (China GDP is announced on Thursday. If these numbers confirm the statement, we should see a shift in sentiment with respect to industrials, materials and oils.)

DD - Looks really interesting here, sitting on its 50SMA and oversold, especially if interested in its higher yield. 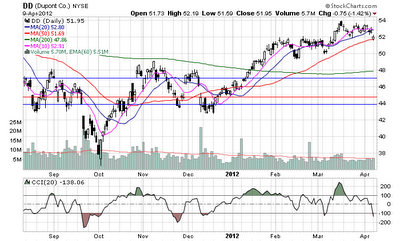 If market weakness persists, it may see 50, guided by the weekly.

DIS - Looking for the bounce off the 50SMA, but  on a multiple perspective, I am also expecting DIS to be around 44 before they report earnings on May 8th.

IBM - This is one of the stocks indicating internal weakness. It usually rallies into earnings (then sells off after the report) but the last three days it got caught by John Chamber's comments about weak government spending and a downgrade.  I am looking to enter IBM near 200, even if it before they report on the 17th. (Would love to be able to get it in around 195, but I think it will find solid support near 200.)

Posted by echotoall at 9:41 PM