If Europe wants to grow again, the Euro must decline. The Eurozone PMI data continues to be crappy, as expected, but the Euro holds firm. 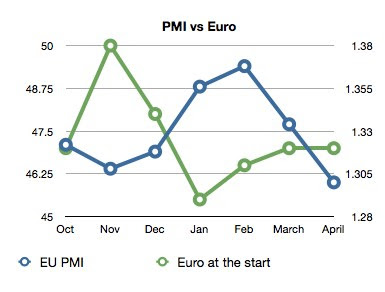 The above is the Manufacturing PMI against the Euro/Dollar since Oct. But the Composite PMI, which pretty much mimics the EU GDP, holds a similar pattern.

The Euro is simply too expensive here in relation to where the EU economy needs to be. Add the heavy austerity, which no doubt is facilitating a lot of this widely expected slow down in Europe, a systematic decline in the Euro should have been a traditional exercise in economics. (Countries default, their currency declines, which facilitates economic growth.)

The above chart argues the decline in the Euro should have started happening two months ago. Regardless of what I think, the Euro will have to see a repricing downward sooner-than-later.
Posted by echotoall at 8:41 AM