I am debating whether or not to play AAPL's report tonight. (Technically, I have a small common position which I do plan on holding into the report.)

If Apple was not reporting tonight, from a technical perspective I would have entered a few call options to play an oversold bounce.  It is very oversold, and the fundies are more then intact. 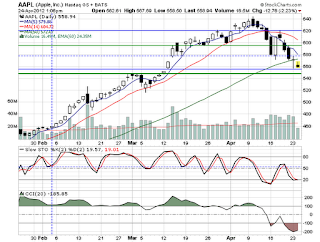 Current chatter is referencing of VZ or ATT slowdown in sales. Thats bullshit. VZ and ATT are two carriers of a wide range of international carriers where the iPhone sales are accelerating. (Especially in China, as the iPhone entered a new carrier just before their new year.)

The chatter also wants to reference QCOM to point to weakness. I do not know what theses blowhards are talking about when they reference QCOM's report. QCOM had a great quarter, and QCOM mentioned insatiable demand. This benefits AAPL.  (These blow-hards are confusing price action with fundamentals. Two very different things. With BS commentary like that, one can understand the level of market inefficiency.)

Everyone today is saying to 'wait' or 'we will enter at 525 or 490'. Well, the market typically does not like what 'everyone' thinks. And frankly those level of declines completely ignore fundamentals.  Those  declines simply accommodate market patterns of a reduction in multiples and technical analysis.

With the expanded base of available funds that can hold aapl (thanks to the dividend), I just do not see such a thing happening. (The trading multiple should be higher.)  But we saw the reactive nature of this market before. Apple ran only after they produced their numbers.. The street is now waiting for the same thing. (Their traditional 'buy high, sell higher' mentality. Fundamentals be damned.)

I don't want to be a hero, but at current levels, I am very tempted to play the report.

(The only reason I am debating at current levels is because I did not think the stock would get below 580 after they reported. There is a 20-30 dollar differential to where I thought AAPL's bottom trading range would be, after this report, and until the iPhone 5 release approaches.)
Posted by echotoall at 1:48 PM