This assumes a run of the mill pull back. If it breaks 675, the daily 32 sma should see a nice bounce, given the hugely positive sentiment.
Posted by echotoall at 11:24 PM No comments:

Some negative chatter has flared up.
1. Apple's lacking in the AI game.
Maybe true, but AI is a back end application that Apple would never speak to either way. Obvious comparisons to Echo and Google's I/O are relevant but skewed. Apple made recent (2015) acquisitions in AI that seem specific to Siri: VocalIQ for speech and Emotient for emotional understanding. Also, since late 2014, Apple has been boosting its voice research team to help with speech recognition. During this years WWDC we need to see the fruits of the merger and research team.
Apple has made voice control popular to the masses, and its not asleep at the wheel.
2. Operational structure is not conducive for services
A significant argument has been made by Stratechery (Ben Thompson) regarding this negative. (Om Malik had similar sentiment.) The premise of the sentiment is built around web-site beta-testing ideology. Multiple beta testing via select users to find optimized layouts. Apple was born in the personal computer age, where life cycles were +5yrs. Their culture of careful design and device longevity is very much indicative of this, and probably optimized for their functional operating structure. iTunes became a behemoth despite the lack of web-style beta testing, and it has done so while being consistently criticized.
A lot of Apple's services success speaks more to the default nature from the iphone. As some services start to go cross-platform, a legitimate case can be made for web-style beta testing. I am not sure why these test can not be built into the functional operational structure, as part of decision data points.
(My own opinion is that some services should be let loose and become cross-platform, as itune. Open imessage, icloud and payments. But that may very well require operational changes.)
The chatter seems to have manifested into a full blown doom scenarios, as is so often when an influencer writes a timely piece that resonates. (CNBC seems to lach onto the negative articles fromperceived  influencer fan boy/girls.) But taking a step back, looking at the preparation Apple has already done, suggests they are not standing still. We just haven't been made aware of their advancements made. At least until June.
Posted by echotoall at 7:23 PM No comments:

I keeps harping on bac only cause of the ridiculous nature of its valuation. Its currently trading 14-15% below tangible book!
No secret the driver are rates. The 10yr is low and the world is a wash with negative rates. The correlation is pretty fierce.

Even though the above relationship reigns, key negatives are not really negatives anymore. While bankruptcies in oil and gas have continued, oil and junk bonds have recovered.

The prices are back to oct 2015 prices. At this time, bac was consistently near mid 15 and as high as low 17! This may explain why the bac has a premium in the bac/tnx correlation.
The move in oil does have me questioning if the 10yr is trading efficiently. (Real world me doesn't mind as I'm shopping for a mortgage. Trader me is like wtf to my bac trade.)
Adding to the inefficiency theory is the GDP Now the last two prints. Currently projected to be 2.8% (up from 2.2%). 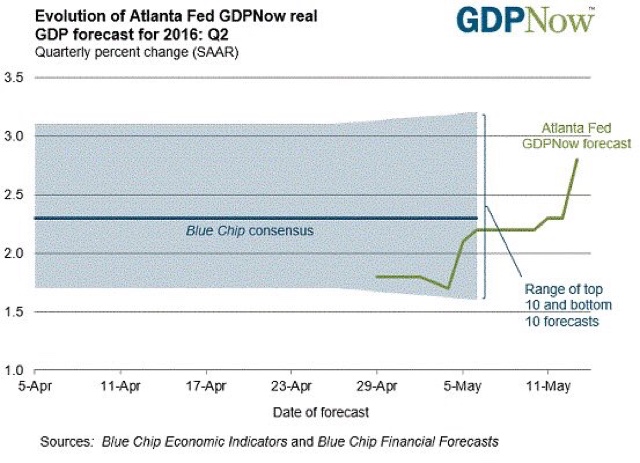 If the GDP forecast proves accurate, treasuries will rise, despite the negative rate trend. If treasuries rise, so will bac.
Posted by echotoall at 5:26 PM No comments:

The monthy trading dynamic is closly mimicking the revenue growth.

Posted by echotoall at 11:10 PM No comments: