The voodoo of technical analysis...
Strictly looking at a pattern, aapl is a temporary sell on overbought conditions via Slow STO. 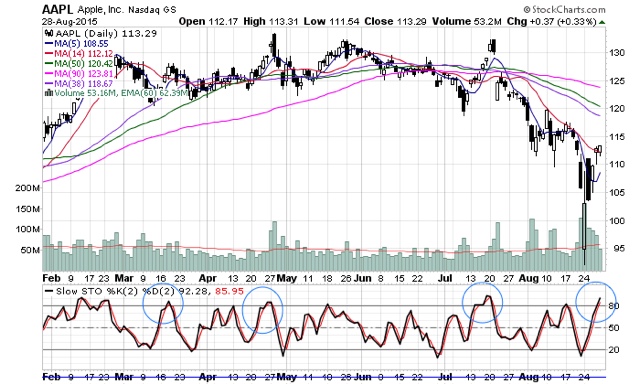 I just have this really strong affinity toward fundamentals. Discipline is a bitch. But this maybe a time to ignore the pattern.
The weekly and monthly charts do not peg aapl being overbought. They are still in oversold territory. There is support and what seems like a recapturing structure from long term trends. 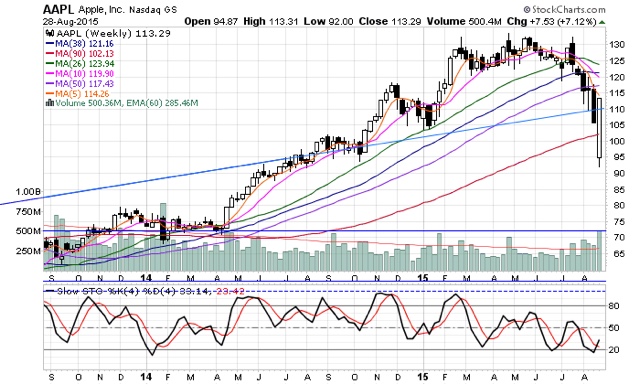 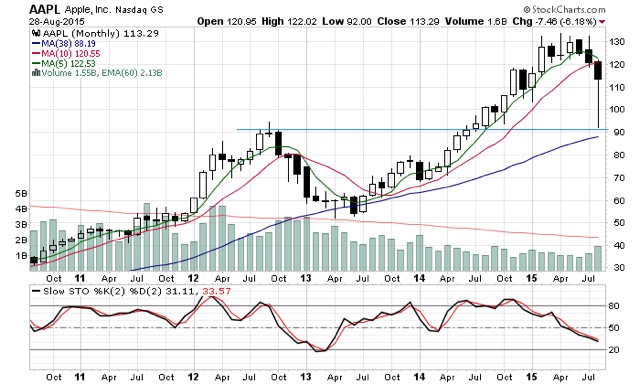 Fundamentally speaking, until im blue in the face, with Apple's current pace of technological execution, innovation and branding, it will be the first sustainable trillion dollar company.
Posted by echotoall at 2:37 PM No comments:

Fear is still pretty elevated, and the SP500 is looking for structure. Long term support was breached.

The 360sma is either recaptured as support, or the market is entering a new trading dynamic. Maybe one of consolidation. High 1800s seems, as good as any, to act as a bottom range. But will the top range be closer to 2100 or  near 2000?
Posted by echotoall at 12:43 AM No comments:

Really not sure what to think. Market sell off was due. China exaggerated the technical correction into a correction that is prompted by fear and uncertainty.
Mid July we got a sense of China slow down due to electricity consumption numbers. Initial reaction is, "look China is slowing." But this could also be due to more efficient use of electricity.
The August blood moon was for China's market. Crazy action and a perception of crazier reaction by the gov. Now the negativity is feeding on itself, naturally.
Here is what we know:
1. An underlining negativity always existed in China. Ranging from ghost cities to corporate debt to banks surviving by the graces of gov liquidity.
2. China is transitioning economies to a consumption model. (Sometime transitions go well, example Facebook from desktop to mobile. Sometimes they go badly, example IBM.) Declines in commodity prices and BABA are not comforting when these are the key indicators to watch.
There is chatter that sees slower consumption but there are also indications, via Tim Cook, that things are still growing pretty nicely.
3. Hard pressed to find systemic issues. There are minimal investments and interconnecting bank debt that would allow China to be a cause for a global financial shock. Also, China is not shy about providing liquidity to their banks to create growth and prevent financial stress.
Today's decline seems more of a fear issue. Especially since China's market rate of declines has not abated.
When there is no systemic issue and the markets are predicated by Fear, the Vix highs are historically around low/mid 30.
There are minimal systemic risk. Non coming out of China. With today's market decline, the market is down 10% from highs.
Of market discipline sake, I have to add to bac at 15! AAPL in the low 90s! IBM at 140s! Putting cash to work today.
Posted by echotoall at 9:31 AM No comments:

Supports are breaking. Seen this rodeo before. Ultimately the monthly 38sma held the support.

Are we in for a similar move? idk
Apple is the stock perpetually undervalued and if it's services (and ecosystem effect) were valued anywhere near others, it would already be a trillion dollar company.
Given the strength of the ecosystem and services, a move toward 90 is doubtful.
Looking for a bounce toward the 10sma.
Posted by echotoall at 7:55 AM No comments: