In my previous AAPL Review post I left out a weekly chart highlighting AAPL's trading dynamic around its long term trend line. I purposefully left it out because it coincidentally corresponds to the 'absurdly-low PE'.

For a long long time, AAPL would follow the blue trend line, until in 2012. The 2012 breach (~mid 30% from trend) was met with an equivalent breakdown (~low 30% from trend) in 2013.
After 2013, an argument can be made that a new trading dynamic formed, and this trend line is no longer valid. Even though parts of 2014 and 2015 the stock acted around it.
If the trend line is still valid, the same thesis can apply. A 25% breach of the trend may correspond to a 25% breakdown of the trend. If that is the case, then a price of high 80s / low 90s can be expected. That would mean a single digit PE.
Does it make sense fundamentally? No.
Apple has proven it's worth as the best tech company (software and hardware) in the world.
Does the best tech stock merit a single digit multiple? No.
The biggest question, I'm assuming the market cares about, as services (and wearables) begin to shine, is the shine enough (considering low-to-moderate iPhone growth, while the HUGE cash-flow remains)? Yes. Or so I think. But that opinion is worth about as much as this post.
Posted by echotoall at 10:36 PM No comments:

Twitter momentum sucks. Im still a huge fan, and think its fundamentally incorrectly priced by the market. (I'm a believer in the $30-50B price range.)
I can re-print the fundies and reasons, but fuck, it's exhausting being in such a negative trend. The break of the 24-25 level was precipitated by other execs announcing departures.
Here is where it stands technically. To break the negative trend it needs to breach the 20sma on the weekly.

Posted by echotoall at 10:52 AM No comments:

Last time aapl started seeing this much negative chatter for its stock was in 2013. 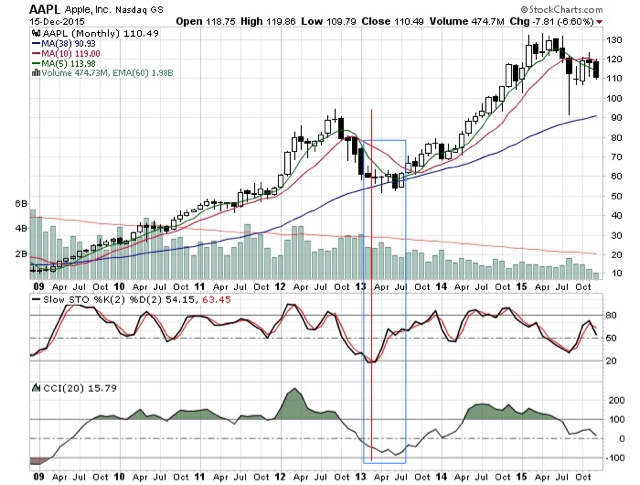 Will history repeat or rhyme? Who the fuck knows.
From wall street to influencer chatter, the sentiment is the same for iphone growth: flat/negative everywhere except China (where there will be unquantifiable growth). Obviously not reassuring. But hey, Goldman's conviction buy recommendation was predicated on flat iphone sales and a growth in services!
The charts look okay, but when the markets are up so much, and a market leader lags, its not encouraging.

The 78 sma on the weekly should not have been broken, and the lack of a bounce sucks.

If the stock follows the monthly pattern, aapl maybe headed toward 90. Fucking 90, for the most premier tech name (or rather the most premier company) in the world. Why such colorful language? Because a price of 90 means single digit multiple, not factoring the massive cash position.
Looking at the historical trailing PE, the asinine single digit multiple can happen. Consider the lower red line the low level trailing PE, and the lower blue line the asinine level trailing PE. 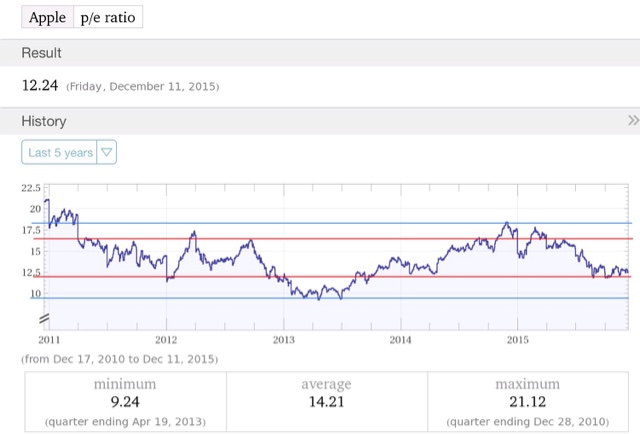 I am for trading momentum, unfortunately I am a sucker for the fundies. A few differences between 2013 and now:
1. Cook era Apple was not tested. Since Cook took over he has more than handily proved his capability to motivate and release successful software/hardware. (The company moves fast and executes.)
2. Wall Street big-gun support. Once the big guns got involved the stock started to turn. They still seem to be involved.
3. The services business is growing fast. (Its a $5B/qr business!)
4. A road map was laid out through interviews or released chatter for the car. But looking at recent developments with their products (Apple Watch, new AppleTV, potential car) and Swift going open-source, Apple wants the IoT space. And with Swift open-sourced, and the quickness of developer uptake, they can own it.
5. A steady increase in margins since 2013.

I'm long aapl. I'm annoyed as fuck that it didnt bounce off the 78sma as the SP500 had a super bounce, but I am long.
Fun fact: In Q1, aapl usually sees an increase in cash position by ~$15B. (They basically earn a Twitter every Q1, free and clear.)
Posted by echotoall at 1:18 AM No comments:

Posted by echotoall at 10:30 PM No comments:

The "junk bond threat" has been getting louder and louder. Although it was thruster forward with Mr Icahn pretty loudly a few months back. But recent Bloomberg chatter is that of pushing for a delay in rate hikes because of this threat. Miraculously enough, some very smart people are considering a .25 point rate hike a potential catastrophe to the likes of 2007. The severity-pedestal the junk market is given is a head scratcher.
How will an issue with one isolated market, about $1-2trillion in size, cause such devastation?
In 2007, the subprime market was the starting domino that revealed gross inefficiencies with the regulations of the financial and insurance industries. Defaults revealed comical insurance on debt, that counter parties could not pay for, leading to horrific leverage, which revealed stupidly low bank capital reserves. The system was going through a domino effect, with no stop-gap built in. (Hence the Fed's QEs.)
This time around, money flowed to junk bonds. The market has been front loading the Fed hike for months but very smart people think the same domino effect will happen. Or they are sensationalizing the scenario for their positions. Does the risk truly exist?
Proprietary funds have been divested from banks. The banks have been going through consistent stress test since 2008. Their leverage is healthy. The capital reserves are arguably over flowing. Without the banks folding, there is no systemic financial risk.
Worse case scenario is now off the table with a little common sense.
The junk bond market is ~$1-2T size market. Obviously it will cause hiccups. Every market is based on supply / demand. Quick selling in any market based security will cause a decline. If redemptions start coming in, as was evident Friday, assets get sold to meet these redemptions. Hence quick market declines. (Add some public knowledge of a known threat to spice up the day, and a market move gets exaggerated.)
Let's assume the junk bond market is $1.5T. Via a normal distribution curve, 20% of it is shit. (Shit meaning companies like Valent Pharma that will not be able to refinance their debt or get new debt, and will have to survive on cash-flow.) Most obligations will get paid but some will probably not. The credit markets maybe looking at $300B in default risk. (This maybe realistic given the energy related names that borrowed heavily with assumptions of higher oil prices. They have yet to see defaults but prob will if the market is shut out to them.)
Two funds made headlines blocking redemptions: Third Avenue and Stone Lion Capital. Understandable given the sizable declines in Junk bonds.
The Junk bond ETF was handily beating the SP500 since the 2009 low, until the begining of 2015.

At the beginning of 2015 jnk was stalling, and by June, the selling into Fed tone-change was obvious. Smart money was leaving. Now its the naked players with the big boy induced exaggerated moves, praying off of fear. 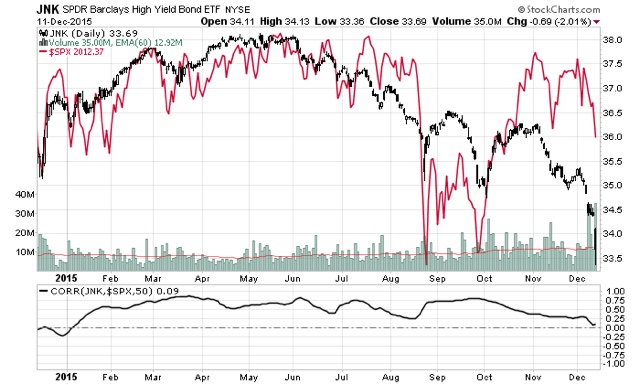 Also evident, are the corresponding moves from one market to the other. But there is no correlation.
I'm not a bond guy, nor connected to high-yield offerings, but from the outside looking in, seems like the unprepared players will get hit while the prepared will take advantage of a crunch. Basically how markets are suppose to work.
Posted by echotoall at 12:57 PM No comments:

Trend and support are obvious. What will be a catalyst to bounce off 25, and breach the negative trend?
Will it need to flush below 25 before pushing higher?
Will it keep collapsing?
Or it can bounce with the higher lower argument is in play, while breaching a negative trend. Super bullish.
Unfortunately, not sure which is the higher probability event.

Posted by echotoall at 10:58 AM No comments: