Apple has seen some interesting consolidation, despite trading flat to slight uptrend.  IMO, more significantly, the weekly has eased. 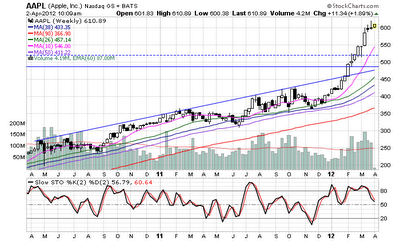 Despite this consolidation, the rise seen from the weekly perspective still looks impressive.

My only concern with Apple, going into earnings, is the potential margin hit from the new iPad. The new iPad cost approximately 20-25% higher than the iPad 2.  The awesome demand for the device was met with w/out a hiccup or expanded delivery times in meeting that demand.  This suggests to me Apple front loaded manufacturing, as they did with the iPhone 4S to meet demand.  In the Oct 2011 quarter, they produced solid numbers, but a margin hit was seen.

The blogger (or independent analyst) estimates are pretty high. So much so some are pointing to a higher eps beat then Apple gave in the Christmas quarter. I do not doubt Apple will produce solid numbers, but the above is my only concern.

If Apple should sell off from its earnings report, I think it may see the weekly 10SMA. I plan on entering on weakness, and since I doubt I will be alone, weakness should be short-lived (barring a really really bad miss).