I have become a fan of Natural Gas.

The economy has stabilized, which means more nat. gas usage, and the American winter should be harsher than usual due to the unusually colder summer.

There is no secret as to why natural gas is on such a negative trend. American was able to tap into its huge reserves, and the drilling has allowed a huge increase in storage. With the lack of use from the colder summer and decline in manufacturing activity, the laws of supply and demand have simply come to pass.

The summer is ending, and the world economies have stabilized, and I think now the time to get into nat. gas plays. I normally play UNG, however I keep reading about the 'super contango' that is taking place. So I am reluctant to play UNG, especially since I think the natural gas story is a multi-month trade... not a day trade.

As such, I will look to play (and trade around) two Nat. gas play... CHK and KMP. I like CHK for the asset appreciation (which I will be using primarily to trade around the trend), and KMP for the increase usage (which I plan on holding for the dividend and appreciation until Dec or so).

Both are at consolidated levels that are to my liking for an initial position. (And will do so sometime on Monday)

Posted by echotoall at 2:24 PM No comments:

JCG - I will be taking on a put position in JCG. Although fundamentally they are outperforming and they have the best unpaid spokes-woman on their side (the First Lady), its valuation is simply too rich. JCG is looking very overbought, and looks to want to consolidate to, at least, 30-32.

PBR - With a nice consolidation, and sitting on support, I like it here. Although I am not understanding the extent of the consolidation, as the new rules about to be announced Mon are suppose to benefit them. Because of this twist, an initial position should be taken as the trade. (It may break down if we get Oil weakness in the coming weeks.)

Gold looks interesting here. It looks it can go either way... a breakout or a breakdown. 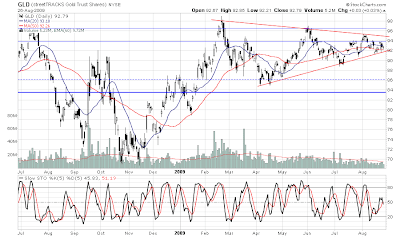 The triangle formation is showing an interesting multi-month consolidation. The question now is... will which way will it break to.

If your a deflation hawk, then it will go down.

If your an inflation hawk, then it will go up.

Since I am neither, anD am a trader, the chart is telling me we will break down first before GLD moves up.

The reason... I believe the market will correct. W/a correcting market, GLD will mostlikely decline (along w/other commodities). But I do not see the mid/high 80s being broken downward on GLD. Especially since I do not expect a major market correction... just a consolidation.
Posted by echotoall at 10:23 PM No comments:

Economic exercises are always fun, and provides a fundamental thesis to trade, but trading conditions are my 'thing'. Right now, the market seems tired, and is pretty overbought. Intra-day action also suggests 'toppiness'. (Although listening to cnbc via the web, Cramer and the fast money crew pretty much feel the same way... so I ain't saying nothing new.)

But here is where I am coming from...

The SP500 is overbought, and since markets do not go straight up, a good short-term trade would be to play the consolidation. 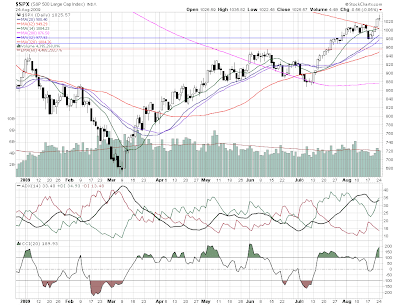 I am expecting an ease in the overbought condition. Underlining conditions are still pretty bullish, so I would be surprised if 1000 is broken downward from this consolidation.

Another clue to the consolidation, is the Naz. It looks to have hit resistance, while being overbought. 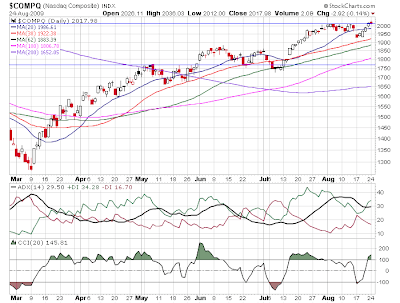 If the Naz continues to march passed the resistance, the markets may just consolidate while moving upward. But judging my the Asian and Pre-market action, I doubt it.
Posted by echotoall at 11:06 PM No comments:

The economy is a man made mechanism, that is nothing more than a series of equations... currently we are in this equation: dollar down allows (all) markets to go up and inflation rises. The opposite holds as well, at this juncture... dollar rises, hence (all) markets go down and we are stuck in deflation.

The economic worries and concerns have by no means ended. No way, no how. I am, and investors in the market, should be fully aware that this market was allowed to rally because the banks were able to ease the mark-to-market model... This is why I linked the article concerning the assets that are going to be brought onto the bank balance sheet, as it will have negative implications.

But... and I stress, we will not enter another depression. The Fed will not allow it. (And I am unquestionably certain that I would rather have a temporary high deficit versus Central Park being a massive tent city. period.) So when I see videos of Elizabeth Warren talking of financial institutions, I am not so worried. Its not that I do not respect the awesome negativity we are in, its just that we have taken the steps to ease the panic.

As such, I do not see another credit crisis arising, despite the commercial real-estate storm, which I am very familiar with. With the current rules in play, and low interest rates, the banks will earn their way out of it.

And here in lies the trick... The banks will need to start lending, to truly earn their way out. If they expand their lending, inflation will rise, especially since the biggest driver of deflation (declining credit and housing prices) have stopped going down.

Now, with banks theoretically at bay, because of the Fed's action and potential future action, the economy was able to level off. Warren Buffett indicated it was leveling off, and I believe him. Not because he is 'Warren Buffett', but because he has access to such a broad range of sectors and industry insiders, and his high integrity. He is one of the greatest economic barometers investors have, and we should pay attention. With the economy leveled off, the banks will lend.

On the flip side, there are highly regarded investors calling to a dollar reversal. (Thanks Dan) With this call, as per the current economic equation, (all) markets will collapse, deflation is far from over and Central Park will become a tent city.

The beauty of economic equations is that they can change.

Personally, I would love to see the dollar rally, and re-gain its strength. But that is only going to happen one of two ways at the moment:

I do not see #1 happening again. That is my money making, non-professional, anonymous blogger opinion :)

I do strongly see #2 coming into the picture, and very soon. But its effect will take time, and in the transition we will see some side effects of too much stimulus. As the old equation will slowly die from the policy change.

1. I added FXI and PBR yesterday. (PBR looks overbought at the moment, but I will keep it as it broke from its high 43 resistance and may want to test mid 45... I have a sell limit order there.)

FXI I plan on holding until it gets overbought.

2. BKE... how in the world traders sold this off yesterday is beyond me. The chart is not indicative of the fundamentals here. The only company I know that produced double digit same store sales numbers during one of the worst economic times of 2 generations, and has a PE of 11. BKE and JCG (J. Crew), IMO, are at the same level of great retailers and should be valued similarly. Except BKE has ZERO debt, so deserves a premium, yet it gets a huge discount. I have not sold this, will not sell this until it gets a much better premium, and am looking to add.
Posted by echotoall at 9:52 AM No comments:

Yesterday Buffett's warning to congress was published concerning the threat of the Banana-Republic. (article) We were always stuck in a deflation due to the decline of housing, but now that housing has stabilized I was waiting for a signal to when inflation was about to kick in. Well, this is the biggest signal an investor could ever hope to have. Buffett has access to a broad range of industries and sectors, so if he says things have gotten better, they have... which mean the recession is pretty much over, and his warnings are very real.
He also points out the proper equation for this market. A collapsed dollar (from inflation) will mean a higher stock market. Since the market is no longer overbought, and with this inflation threat now getting started, market shorts should be taken off the table. (Or a best very short-term trades)

The one thing, IMO, that may counter the above, is a rule that will become effective in Jan 2010 that will bring approx. 1 trillion of off-balance sheet 'bad' assets onto the balance sheet of the banks. (article) This obviously will be a hit to the banks, and allow for more losses. But the system is stronger now, and they will be able to absorb the hit, although, IMO it will hinder their earnings growth for a while. (But I do not know if the markets will pay attention to this pretty important fact, especially if the market keeps rising... something to keep an eye on.)
As for the market, it is at a very high PE, yet does not seem to want to consolidate enough. It bounced off the 320SMA. 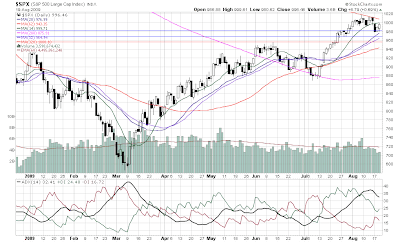 With the inflation threat now in play, we are dealing with an economic equation, not market fundamentals. So I do not know if a high PE matters at this juncture.
With this thesis, the most interesting plays at the moment are Fs... F, FCX and FXI. Technically, they look interesting. 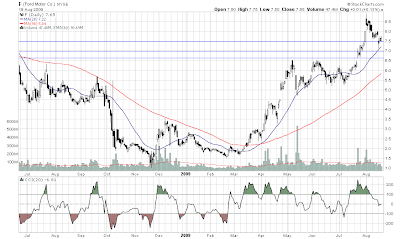 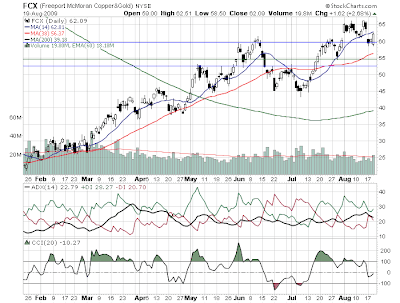 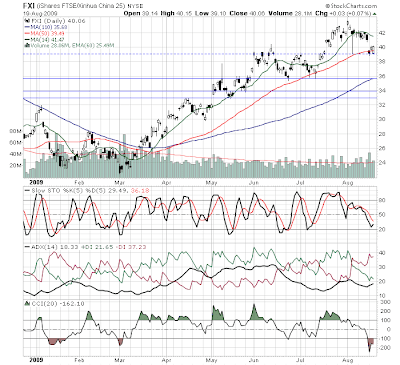 Looks like the 320SMA thesis was correct, via the previous 'Market Thought' posts... wicked.
So now we must question what will happen next. Since I am very tired, having just arrived back from Holiday, I can not give a straight answer just yet. The reason...
1. the 10yr yield is very oversold, which means its due for a bounce. (IMO, the yield rises, so does this market, and push the SP to 1000)
2. the Vix looks interesting. While overbought, it looks to be changing a trend. (could see the SP 500 between 950-970, if the market chooses to go negative)
Conflicting. But I still think the risk is to the down side. (limited rewards on the upside at current levels) I have not yet looked at the individual stocks to provide further psychological mood of the market just yet, and will not until tomorrow. I am far too tired at the moment.
Posted by echotoall at 10:44 PM 2 comments: