One of the worste charts I have seen in a while, barring my beloved aqua blue friend.

Just nasty. Many funie reasons, but lock steph w the commodities sell off.
The glimmer of hope is the weekly chart. 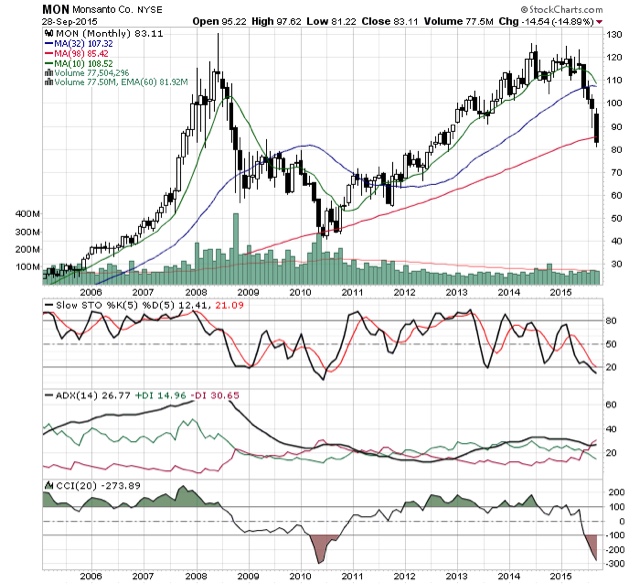 The stock has approached conditions of the great recession. Its at a historically low trailing multiple. Battling low demand from farmers. On the constant defense to support the validity of their product. Fundamentally, mon still looks pricey. But technically, looks interesting.
*I am not entering. Even though I think it's an interesting play here.*
Posted by echotoall at 11:08 PM No comments:

Seems like now we are entering a new trading range, where the markets will channel trade for a while. (Probably until global GDP growth stops slowing down.)
Posted by echotoall at 12:32 PM No comments:

From the loud chatter available we know there are only a few, if only one, dissenter preventing Jack D from being full time CEO. The vocal criteria from Chris Sacca were:
1. Low engagement with twitter product
2. No real skin in the company
Suntrust provided the below chart in a recent note.

This leave two clear candidates: Peter Currie and Marjorie Scardino.
The other day Sacca tweet "he" in reference to the dissenter.

So we are left with Peter Currie as the most likely man causing the stock to remain in a discount due to CEO uncertainty.
To be clear, the above criteria are subjective and in relative terms, it does not exclude David Rosenblatt and Peter Chernin when comparing against the founders and Peter Fenton.
Posted by echotoall at 10:22 AM No comments:

At least as per yield correlation. While bac declined, the 10yr held its own. BAC should be trading near low/mid 17.

Posted by echotoall at 1:09 AM No comments:

Over the last 5 years of crappy, quarter-over-quarter disappointment (every freaken quarter since Ginni took over). But they are transitioning, and fundamentally it seems like its working. Regardless of the glowing negatives, the stock has a bright spot or so history would suggest.
Assuming estimates hold, IBM should do eps around 15.75 (consensus 15.73).  Below is their 5 year trailing PE.

Simple math: 11.4 x 15.73 = 179.32
Taking the lowest trailing multiple to the low end range of year end eps, we have an interesting target price by year end.
This would also support a technical move toward an upward resistance trend.

So yeah, bullish ibm into the year's end. (Hopefully by then their transition is seeing traction amd they see multiple expansion. Setting up for a great 2016. But I will settle for 180.)
Posted by echotoall at 10:27 PM No comments:

Yahoo has a tremendously high passive user base Twitter is looking for, and Twitter has the influencers that can convert those users to keep building a community around interest.
Yahoo does not have a network effect. Their early developed communities have dwindled, and the main influencers are active on Twitter. But Yahoo still has amazingly high traffic, with an active user base.
An example of the potential is the Yahoo Sports mobile app. (But Twitter should still keep the other deals they have in place with ESPN, etc, if they can.)
There is a strong leader in Mayer, effectively bringing back yahoo from the brink. Although the market is slow to catch on.
I am of the thought that Twitter is undervalued. Price-to-sales near 10 while growing top line at 60%. And despite the criticism of "scale", that top line growth is coming with "only" 300M users. (The numbers seem to contradict the 'scale' argument. But hey, a billion users just sounds cooler or convienent.)
Despite the above, Twitter can and should stay independent. Twitter seems on the right path, and it's just a matter of time before they prove it for the street. (Although the lack of leadership is pretty annoying.) And with Project Lighting in the wings, that may add to the goodness. (Would love to see them keep using their protocol status to embed themselves throughout the web and mobile apps.)
I just think there is a legitimate business case to be made if Yahoo and Twitter merged or Yahoo bought Twitter.
Posted by echotoall at 8:59 AM No comments: