Now the quarterly results are in for MMI, GOOG and AAPL, here is a look at their respective margins. 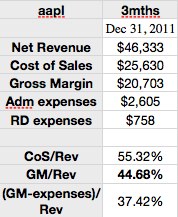 Google has the potential to increase its margins if they take better control of MMI.

The most important thing they can do is to take from Apple's play book. Drastically reduce the number of offerings. Motorola currently has 27 product offerings, 27!!! A taste of what I would like to see from GOOG:

2. All offerings to be the latest Android OS. (All to have the ability to sync to the latest OS version. Remove fragmentation via the Motorola phone.)

3. Make all the Motorola phones (the 3 or 4) IT friendly for enterprise adoption. (Which also means #2 is very important.)

(Ideally, I would love for GOOG to re-engineer Android from the ground up, to prioritize the software for touch screen, but that maybe asking for too much.)

Everyone has their opinions of what Google should do with Motorola, as an investor, I want to see them make an effort in properly positioning the combined company to better compete with AAPL. The above three loose guidelines facilitates that. (Because they speak to production efficiency and greater user experience.) If they can not, Google does not deserve a high multiple. (They can still offer the Android on multiple carriers and try to mitigate the fragmentation issue, but from a company perspective, they need to improve margins and increase sales.)

I am currently actively looking to go long GOOG. It got the bounce off the weekly 50 SMA, but I am waiting for the market to react to the less than stellar numbers from the combined company. Hoping that allows me to enter around 550-560.

Current weakness is from a bad earnings report (in relation to the street's expectations), and some maybe from the crappy acceptance of the Google+ search results by techies and influential bloggers.
Posted by echotoall at 2:56 PM