Over the past two months I have dished out my far share of Google criticism. Through out that time, the influential bloggers have been having a hard time adjusting to Google's new (and needed) strategy, and simply been beating up the company. But throughout this negativity, Google search held its own and important transitions took place (and are taking place) to better position Google to compete in the 'Post PC' or 'PC Plus' world.  So as core businesses remain intact, an investor can not simply be as negative as before.

The most important factor regarding Google's transition is that it is being proactive. It is not being reactive. And I think this is why the influential bloggers are having such a hard time adapting to the changes.  (If everyone was a visionary, change would not be so difficult. I am not a visionary, I just pay close attention to the data and trends.)

From a product stand point Google search and display businesses are still best-of-breed, and growing quite nicely. But there are also long-term threats that Google has been trying to address. Google's ultimate threat is that Search simply becomes a 'feature' due to the answer engine.  Google executives pretty much admitted this a few weeks ago, but they have been quietly positioning their current offerings to an answer engine for some time now. (The most obvious being Zagat and ITA, but they have other verticals as well which can become more pronounced if Google really was an answer engine.)

One of my major concerns was that Siri would be incorporated into the iPad. However, it was not.  The reason is probably because of the inconsistent quality of service. With this current inconsistency, Google should retain its mobile usage share. (Share becomes less of an issue as mobile/tablet ads mature and click through rates accelerate.)

(Just a quick anecdotal side note: I would never use the Google App on my iPhone. I would just use Google through safari because I found the app to be crappy and slow. But the Google App on the new iPad is pretty awesome. Its smooth, fast, flexible and voice command is really good. I do not type Google searches anymore when using the iPad. Its cool.)

But the point of this post, on this forum, is to highlight its current trading dynamic in relation to its technology brethren.

Since the end of 2011, for the most part, technology stocks have seen multiple expansion. The one company that has not is Google.  The below chart highlights the magnetite of multiple expansion seen from all these companies since 12/31/2011 to 3/30/12. (Using GAAP earnings.) 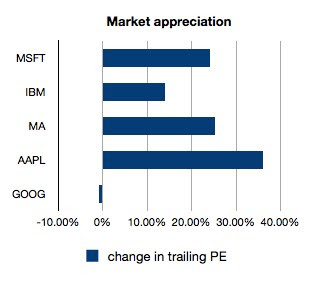 I could have included more names, but the above drives home the point.  Any price action that Google saw this quarter was not due to multiple expansion.

In fact, if we make two basic assumptions:

A baseline case can be made that GOOG should maintain its trailing multiple of 21 over the next few quarters. Looking out over two quarters, we can see where Google should be trading.

Over the next few weeks, the obvious scenarios include:

1. earnings below analyst expectation - This would merit continued multiple contraction, probably toward 19. (I use 19 because this was the low-end multiple Google achieved after a poor Jan showing, and it was the multiple before the market pushed higher this quarter.

2. decent earnings - This should merit no multiple expansion.

Below are charts that highlight the ranges. The "1 quarter forward" is for this coming quarter, and what I am expecting from a stock price.  The "2 quarters forward" incorporates this quarter and the next. (Both use GAAP eps.) 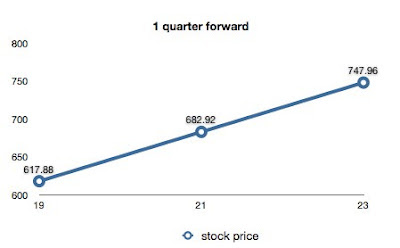 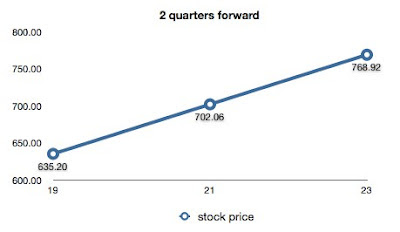 Barring a disastrous earnings report, and market shock, I believe the above captures the potential down side and upside side over the next 3-6 months.

With Google trading around 640, the risk/reward does not seem that bad.  If Google trades toward 620 before they report earnings, that would obviously be a better risk/reward.

Given the new found disciplined cost structure, continued growth in overall search and positioning for the PC Plus world, I am expecting decent earnings.
Posted by echotoall at 3:45 PM