The market is rallying thanks to the better than expected Global manufacturing numbers (PMI).  This is good news.

(Note to partners: I covered the light protection near Monday's morning low. Wrote a post about it, but my internet crapped out and the post was never published. But I am actively looking to take it back on.)

First, China's official PMI (which highlights the larger manufacturers in China), along with China's lack of rate cut, strongly suggest China's economy is doing better than economist and negative traders think. Second, and probably more important, is Germany's PMI figure.  It showed an expansion, continuing to prove to be an anchor to the Eurozone.  For Germany, even with the lowering of global consumer demand expectations, their manufacturing sector can expand with a Euro around 1.26 to 1.31. However, the EuroZone, as a whole, is still contracting, and needs a lower Euro.

Overall, I am still cautious because the leaders into this rally, the industrials, have been acting weak. (Although the financials have made up some of the weakness.)  And there are some subtle stresses due to extreme overbought conditions.

A few points of concern: 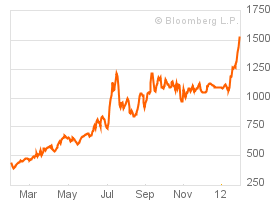 They do not need to tap capital markets until the end of this year, so right now it should not play a role in driving market action.

2. Involuntary status on the Greek restructuring.

Some issues the pundits say are a concern, but do not concern me:

1. EU only focused on austerity. This is not true. Italy's actions last week prove other wise.  They are actively working to improve government efficiency and promote growth initiatives. Other EU members will follow.

2.  China not raising rates.  Their last GDP was better than expected at 8.7%.  China feels they do not need to do much right now, as their PMI suggest. That is a good thing.
Posted by echotoall at 9:31 AM