most interesting market correction, ever

We have a correcting market, while certain names are green, and the most telling is IBM.  While the market should be correcting, this mofo is breaking out!

I was really hoping to pick IBM up near 190 or 188 with the consolidating market. But alas, I will probably have to settle to the mid 190s. Its overbought now, so I am waiting for an ease of the overbought condition.

ATI - Oversold, and near lower end support.  I was surprised to see the weakness yesterday, considering the aerospace industry trends. But an interview with the third largest lease operator CEO may have explained it. He puts into question the recent orders from emerging market airlines.  Although, I was kinda perplexed by his comments because emerging market growth is where the vast majority of economic growth is coming from. So from a macro-economic perspective, the orders make sense. 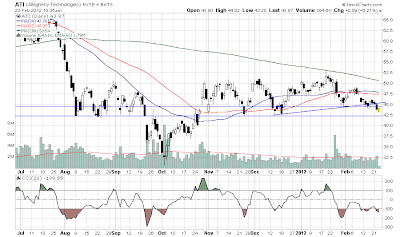 BGCP - Ideally I would have liked to have waited for 6.40, but the set up is interesting for a trade to the low 7s. I took on half of the position, and will take on a full position if it declines to 6.42.