The wall-of-worry is built on questions:

Would you sell a stock that is growing revenue and earnings north of +50% (and probably +20% next year) even if it has a trailing multiple of 13? (And this company facilitated in creating around 466 THOUSAND jobs since 2008, the start of the greatest economic collapse the world has seen since the Great Depression.)

How does an investor decide to sell a stock of a company who's products are further ingrained onto users with an 86 million subscriber strong moat (iCloud), all while the stock is still trading at the low-end of its trailing multiple?

While Apple is truly a stand alone situation, there are other such stocks where similar arguments can be made. There is only one problem, stocks and markets are generally very overbought.  So the money managers will wait for a pull back. (And I am not knocking them of this, cause over the last few days I too am waiting for one.)

What if that true pull back does not come when everyone expects it to?  What if, the hint of weakness IBM was displaying this mornings, despite a very positive upgrade and trading near its all-time high, turned out to be its consolidation and the opportunity to enter? 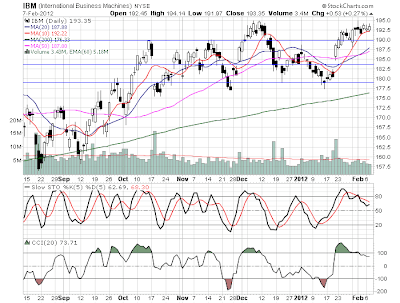 Look how the stock maintained its 10 SMA support, and while trending up the below oscillators came down. (Thats bullish. I am not crazy about it, and I would rather see IBM go toward 188-190 before I enter, but I can't distort the true interpretation just because I want the stock to go down.)  IBM's continued rise fits into my long-held belief of multiple expansion for the stock. (After all, before the 2008 financial crisis and proven execution of their 5yr plan IBM was trading near a trailing PE of +16.)

After all these questions we eventually get to the most important one, when will the market sputter-out?

The other day, I provided the fundamental thesis in the 're-evaluation' post. A move to 1360 is not unreasonable.  But the technicals should be more revealing.

1. Throughout January any market decline has been shallow, and met with awesome buying power. However, we are at an obvious technical resistance.

Brief declines happened twice. Once in mid Jan and at the end. (But the buying at the end was due to surprisingly positive economic data points.)

2. Since everyone and their mother sees the obvious, there are a few indicators I am closely paying attention to suggest market activity.

a. Copper - Since there are a ton of money managers that place way too much emphasis on this commodity, if copper breaks out, it will be correlated to the economy and the market.

b. Treasury yield - The yield breaking its negative trend. I do not care how long the Fed wants to keep rates low, they can only keep rates low as long as the economy lets them.  As stability continues, and positive economic data keeps coming, yields will rise and the perception of 'money-leaving-bonds-into-stocks' will facilitate an elevated market.

c. Complacency - The Vix/SP500 overlay merits caution, but it seems like it can facilitate a market rising a bit more.

This chart is the one giving me the most problems. It tells me to be scared, and take on market shorts (that don't work out) or be uber cautious on 'long' trades.

The one weird thing about the Vix over the past few days was that it actually saw the low-end decline, that got me really scared, but after that minute (literally) it showed resilient levels as the market drifted upward. (Which means others are preparing for a pull-back, or a lack of complacency.)

The above thought process has been guiding me. Basically, the market can push somewhat higher from here, but I am really letting copper, the treasury and Vix/SP500 overlay guide by how much.  However, regardless of overall market action, individual stocks can and most likely will appreciate despite the overall market.
Posted by echotoall at 8:20 PM