At 10:15am FIO started to really move.  There is no news on the stock, and the only chatter I could find was vague rumors regarding a takeover.

Its always nice to see a stock I own move like this, but I think the rumors are bullshit.  If they are true, the buyer will really have to pay-up. (Like 5-6x the current market cap, $10-13B.)

Every interview I have seen with management has always pointed to a company that wants to go at it alone, innovate and change the database landscape.  And Fusion-io is on the leading edge of a complete disruption at the back-end of every cloud based company around. (And since all companies are moving toward cloud based initiatives, any sane investor can see the value in Fusion-io's offerings.)

Is it crazy to think FIO can eventually be worth $10-13B? Considering their revenue growth curve, and sector disruption, I think it is very reasonable (if not conservative), albeit in a time frame measured in years.

But alas, I am a trader, and will actively trade the name based on its patterns of oversold and overbought conditions.  Despite the move (and the obvious short-term resistance at the 68SMA, FIO is still not overbought, hence I am not letting go. (Although at current levels I do not want to think of trading it. I would rather actively trade it when it begins to break the 30s.) 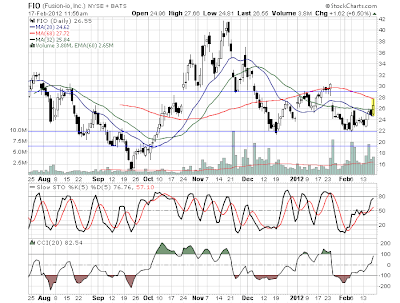