Even though the market is pretty resilient, consolidation is taking place. (With respect to the market strength, IMO, its also another sign of a strong market.)  Below are some thought on potential trades.

ATI - No recession, and a solid aerospace cycle, ATI does not belong in the 40s.  It belongs in the 50s, if not 60s.  But sentiment is a bitch, and provides opportunity.  I already own it here, and for anyone who is aggressive, now is an interesting entry due to its light oversold conditions.  I will be entering a second position at the bottom channel range near 42.50. 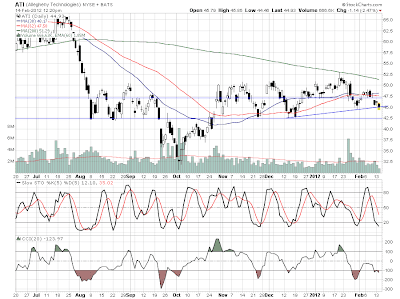 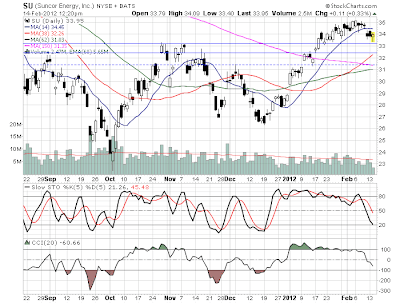 DD - The daily chart looks kinda scary. The gap may facilitate a move to mid/low 48.  Low 48 should hold as the 50SMA via the weekly goes from resistance to support.

TBT - If we are entering a secular bull run, we will see a sell-off in treasuries.  TBT is a play on that. I think it re-tests 22-23. (The current action reminds me of the bank stocks in early december.)

FIO - If anyone wants to play the boom in web 3.0, FIO is the play. (Along with IBM, but FIO is a pure play.) There is a lot of mis information about FIO being circulated, and the last quarter the stock took a hit because of compressing profit margins.

First lets tackle the competitive factor.  There are only a few competitors: OCZ, a few companies in VC stages and EMC.  When FIO is compared closely to its competitors, FIO really does not have a competitor.  The details of this belongs in a stand alone post.  Here is just a brief synopsis.

2. EMC - The Fusion-io's CEO has been pretty aggressive highlighting exactly why EMC's offering is so different and does not really compete with FIO's current offerings.

A recent report from Cisco, regarding mobile traffic, translates to a huge demand for higher processing power, that shows the need for FIO products: Between now and 2016, traffic on wireless networks will multiply 18 times, and will account for 130 exabytes of data per year.

Now for the margin hit last quarter.  The December quarter is usually a high margin quarter for FIO, however they had a very large customer wanting to upgrade to their new offering so they needed to purchase more raw materials. Going forward, margins should approach seasonal trends, but the compression last quarter was actually from higher demand.

The technicals look good for an initial entry here, and I am prepared to add, with a heavier position, in the high teens.

Posted by echotoall at 1:30 PM