Over the past week, the positive chatter has increased significantly.  A lot of heavy hitters have come out to express their bullishness, their preference of stocks-vs-bonds and the beginning of a secular multi-year bull run.

I usually don't post all the chatter, but the list is filled with pretty impressive heavy hitters. It includes:

-Buffett (stocks vs bonds)
-Fink (100% stocks)
-Summers getting more bullish on the economy
-Ron Baron, Byron Wien and Peter Fisher on cheap stocks and a secular run
-Roubini turns bullish (although this can be a contrary indicator)
-Barron's title of Dow 15,000 by 2013 (the ultimate in contrary indicators, but a reasonable expectation non-the-less when working out the numbers w/multiple expansion)

If their bullishness is correct, and I am hard pressed to argue with the likes of Buffett, then the indicators I am pointing to in my post 'the shift', copper and treasury yield, are correct. Especially the Treasury. A break out in the treasury yield will facilitate the notion of a secular bull market.

Anyone who pays attention to the technicals in the treasury market got very worried last week.  A noticeable shift in trading dynamic took place.  A bearish one (or bullish w/respect to yield rising).

IMO, there are three reasons for the rise in the yield:

1. Technical - The negative trend is broken. Without an external shock to the system (ie Europe explodes), even with the Fed wanting rates to be kept low, the yield looks to want to move higher.

2. Fundamental - The only reason the treasury is below 2.8% is because of the fear of the Euro-enduced economic collapse.  The LTRO, and tangible progress within Italy, Spain, Portugal and Ireland, IMO, are enough to merit higher rates. Greece is still a wildcard, but the most likely outcome is that the some level of austerity is acted upon.

3. Fundamental - The treasury yield is usually representative of US GDP growth. Recent US economic data shows an unequivocal disconnect. At the very least US growth is near the high 2%, and if the recent jobs number is a hint of things to come, growth may even be near mid 3%.

In order for Treasuries to stay at compressed levels China needs to see a hard landing or Europe needs to see a deep recession.  Unfortunately for the bears, Chinese PMI and EuroZone PMI strongly disagree with the recession thesis.  Recent economic data from China has taken the hard landing thesis off the table. And EuroZone PMI has been improving since Oct 2011, facilitated by a lower Euro. 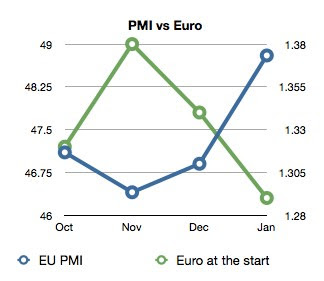 The above trend strongly suggests as the Euro declines EuroZone PMI will increase, and recession in Europe will be avoided. (And with the ECB about to infuse a shit-load of Euros into the system at the end of February, the Euro will eventually decline.)

Needless to say, fundamentally, I am bullish.

Technically, there are signs of a consolidation or a healthy pull-back. The market is still overbought, and breached the 5SMA, which suggest the market can go to its 14 SMA.

However, a typical 3-5% decline (from 1354) would suggest the market can touch 1300-1314 or so.  The severity of the decline depends on the level of believability of the "economic threat", that caused the decline. In this case, the threat is again the level of economic destruction Greece can cause.