BGCP - looks to want to form, at the very least, a head-and-shoulder pattern, which would suggest a move to 6.55-6.60. However, with bank pressures easing this should facilitate the stock to breakout from the pattern, and cause a bullish leg up. (BGCP does not hold gov debt, they only help sell it. As sovereign yields decline, this removes downward pressure from BGCP.)

GS - is very interesting here.  The daily chart continues to support a bottoming, with a bias to the upside. The weekly chart still highlights the SMA resistance.  The play, imo, is to purchase on weakness as the weekly will soon confirm the long-term bottoming process. Also, something interesting, GS has not been overbought via the weekly for the entire year. Its itching to get overbought on the weekly. 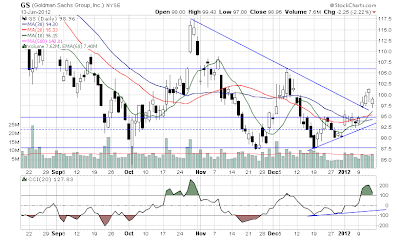 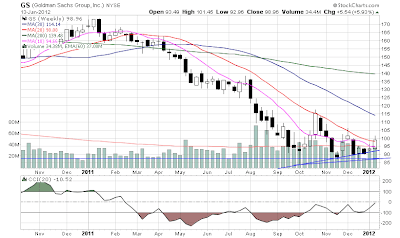 IBM - continues to test its support levels as it pushes downward. If anyone has the risk appetite, mid 177s is an interesting entry point. The crappy technicals on the daily chart would merit waiting until the low 170s, but the positive SAP results can counter the crapy chart.

Near the 200 SMA I plan entering multi-day/week positions.

(Some venting, if you do not day-trade, you will not care about this... I did not see the SAP news until it was too late. Gave me some frustration on Friday.  I entered some IBM call options in the AM on its thrust downward near 178. I planned on holding the calls more than just a day. But as the market pushed higher late morning, I saw an opportunity to short the SPY intra-day.  Thinking IBM would act in sympathy to the market and I could buy it back cheaper, I sold the IBM position as I shorted the SPY. IBM did not act in sympathy. If I saw the SAP news I would not have done this. The SPY short worked out, the IBM trade was basically a wash, no gain/loss, other than the frustration.)

Posted by echotoall at 9:32 AM