When I look at Google's current situation, I find myself hesitating to take a position into its earnings report.

From a pure technical stand point, its 'blah'. 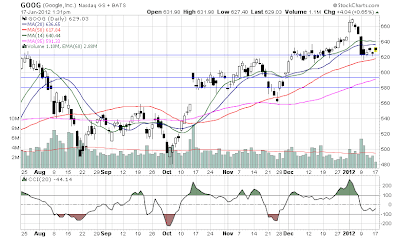 Superficially, its not overbought and supported by its 50SMA, but there is a weakness present. (I am not the only one with the hesitation.)

Google, excluding MMI, should produce good numbers, facilitating a pop.  When Google announced the MMI acquisition, they indicated the results will be combined around this time of the year.  If they start reporting the combined numbers, I fear the street will negatively react to the stock if Google's results could not make up for the MMI drag down effect. Especially with a relatively high trailing multiple on Google.

I find it more prudent to not play it, and see what kind of plan Google has to increase MMI's hardware margins.

If the street ignores it, an opportunity may arise shorting GOOG waiting for the street to recognize the effect. (Unless there was a ton of behind the scene action that was completed to improve margins over the last 3-6 months.)

If the street does realize the effect, an opportunity may arise to enter GOOG at a better price or at least with more information (aka certainty) as to how they plan on leveraging android via MMI.

(I would not mind entering GOOG with a trailing multiple around 18-19 considering the MMI effect.)
Posted by echotoall at 1:50 PM