There is more evidence that AAPL's earnings will reflect the bullish estimates of the bloggers.

Last week there were numerous reports regarding Apple's PC gain (excluding iPad) against an industry decline.  However, if iPad is included into these numbers, Apple is now the largest PC vendor. (image from asymco.com) 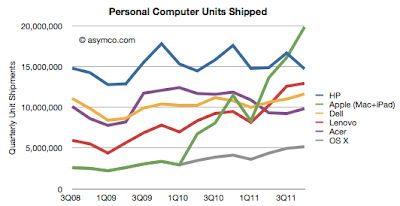 There is an argument to be made that iPads should not be included into this number, but as iPads disrupt PC usage the argument gets diminished. Common sense dictates that PC usage is being replaced by iPad usage, and the numbers should be combined. But for the sake of data supported justification, IDG published a report that 12% of enterprise iPad users no longer use their laptops.  IMO, the above is a better representation of computer share.

Apple is in a situation where it has gained mobile and PC market share this quarter, making the blogger estimates of +11 eps far more realistic than wall street estimates.  If we assume Apple will be allowed to trade with a trailing multiple of 14 (which is lower than the current multiple of 15.17), and a eps of 11 for the quarter, AAPL will trade at 450.

If 450 is too unrealistic for anyone, even looking at Apple's trading dynamic via its ex-cash multiple the stock should trade near 430. (This is a bit more complicated, bare with me.) Over the last few months, AAPL has traded with a ex-cash multiple (removing the cash hoard from the stock price) between 10-12.1. If we give Apple an ex-cash multiple of 10.5 as they report 11eps (with an assumed $5B cash addition), this still gives Apple a stock price of 430.

The above all assumes a low multiple for AAPL will still remain, despite the kick ass performance, making right now a good entry point for anyone interested in being exposed to the risk.

However, over the next few months investors will see Apple's plans for TV.  These plans can expose Apple to 1 of 3 things:

1. increased revenue and earnings from hardware sales via the +$100B television market

2. a sizable subscription revenue stream, which the under invested value boys will love, expanding AAPL's multiple.