Today's weakness in VZ is bringing the stock to oversold territory. So I stated entering the stock. 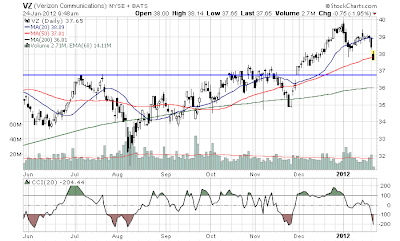 The first position was at the 50 SMA. A heavier position will be between 36-37.

I am not a fan of the traditional cable companies for 2012 because I truly believe a disruption is coming on the TV Content delivery side of their business via a user friendly a la carte model. But Fios is started from a much lower base, and seeing double digit up take. Basically, the Fios growth should mitigate the disruption effect. (I also think VZ is in a position to add value added services to those who have FIOS and Verizon Wireless, but that remains to be seen.)
Posted by echotoall at 10:11 AM