NFLX has got to be the most storied stock in 2011, and I would not be surprised if its story becomes a case study in business schools. It is a beautiful and colorful example of what to do, what not to do and the powerful reaction in the age of the social web. It truly is awesome.

A look at the technicals indicates the higher probability is that upside is limited here.  The daily shows a stock potentially hitting its upper end channel range, while the weekly suggests NFLX is close to a trending resistance point. 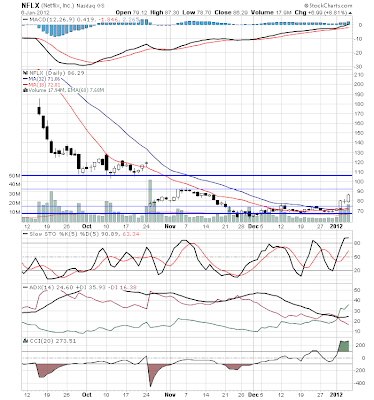 I put more indicators  on the daily chart than I usually would, but they serve a point. The MCDA (at the top) and ADX (bottom-middle) suggests pretty bullish action. The CCI and Slow STO indicate overbought conditions.  Basically, from a momentum trading perspective, this set-up tells me NFLX will see one of its resistance points before the market decides to sell off.  The potential 'sell off' points are low 90s, high 100s or the 18SMA on the weekly chart. (The 18SMA was clearly a support for many many weeks, so the probability is high it will be resistance this go around.)

A look at the macro fundamentals is a bit trickier than usual, this go around. At the moment NFLX still has a great brand with a ton of eyeballs. They are losing money because of the heavy damage control marketing they need to do from their missteps. They can easily make a cash flow equivalent to the quarter prior to their fuck up. So if the macro fundamentals of the TV content business stays the same, and they don't have to spend so much on marketing, then they their stock valuation should be based on the cash-flow in relation to revenue or earnings growth. You can do this now by normalizing the cash flow, backing out the additional expenses from the previous quarter to this quarter, and using company growth rate as the multiple to the cash flow to derive a value to the company.  Then divide that number by the number of shares, and you have the assumed current per share value.

However, there is a major shift taking place within cable and television content distribution. At the moment it is at an undercurrent, but when a big-boy player figures out a user friendly experience the cable companies content distribution biz is pretty fucked. (I don't cry for them as they will jack up the price for internet access.) 'Cutting the cord' is real, but the numbers are still too low for anyone to really care.  Here is where I think the concept of Apple TV comes into play.

What Apple did for magazine and newspapers with Newsstand, we must assume they will do the same for TV content. (Here is my write up on it.) That means current TV and Cable channels will simply be Apps presented in a central location within an Internet connected television. (Apple does not need to be the company that implements this, but they showed the world the model to which to follow, and any company worth its salt will basically mimic the model.)

So now the real question becomes, will NFLX benefit from the new model?

For stocks I trade, I do the financial analysis to answer the types of questions I presented above. This is what lets me call bullshit on analysts that spew bullshit. I just do not trade NFLX to have completed the assessment, but a lot of people trading the stock do not either.  They rely on the technicals, and that is why I started with the technicals.

Hope this helps. Good luck!
Posted by echotoall at 10:07 AM