Consumed with all the drama of an EU debt downgrade, along with today being Friday the 13th :), the markets are down.

We have a situation where two of the three largest rating agencies (Fitch and Moody's) already stated they will not downgrade French debt this year.  That leave the Standard and Poor's. In Nov they accidentally issued a downgrade on their website, but quickly retracted the statement.  However, rumors are floating around that now, they will do it today.  Okay.

The CDS market was already pricing in a debt downgrade since September. (see CDS) 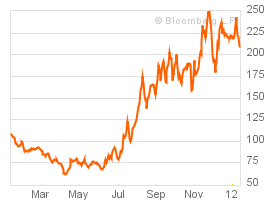 I am not trying to make light of the situation, but if anyone was paying attention to the chatter, this is not a surprise.  Even Sarkozy started shrugging his shoulders to a downgrade.

From a technical perspective, the market may decline to the 14SMA with this negativity.

However, a look at the 10yr yield would suggest the market was expecting this for some time, and is at a base line support.

Could it go lower? Sure, but the higher-probability-scenario is that it does not.
Posted by echotoall at 10:00 AM