Google needs to Wake Up

Over the past few weeks I have been trickling my analysis on Google through various posts. The post include:

1. The threat to Google's core business

2. Comparing Google to Apple before both companies reported their recent reports. The assessment is still very valid.

3. My assumption that Motorola will be 'special'. (After Rubin's talk of a 'firewall', Google's rhetoric points to keeping Motorola a dumb OEM, I'm not so sure.)

4. Regardless of the utter stupid idea of a 'firewall', the margins of the combined company will need to improve.

I am not the only one that thinks Google needs to wake up.  The market does as well.  In relation to its technology peers, Google is seriously lagging.  At a time when AAPL, MSFT, IBM and MA, along with the overall market has seen significant multiple expansion, GOOG has seen a multiple contraction. 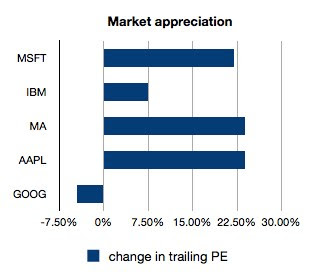 The above chart shows the change in trailing PE from early January to February 29th. (I included MA or IBM because I view them as general technology performance. But AAPL and MSFT are better competitor comparisons.)

The obvious reason for this is due to Google's poor performance last quarter. They were below estimates, and the stock took a hit.  The only thing keeping it afloat is the overall performance of the market and technology.

Google has the opportunity to see hyper growth and be a true competitor to Apple in the mobile space, but their current vocalized strategy is rejecting the opportunity.

Instead, Google has vocalized an approach that will have it merely be a competitor to Microsoft, and the two will be fighting for Apple's crumbs.

Google and Microsoft have taken the "PC model" OS strategy in a "Post PC" world!  Does anyone else see the stupidity in that logic?!?

The "PC model" OS strategy in a "Post PC" could work if there is a tremendous amount of communication and organization between the OS developer and OEMs. But Google already proved the level of cooperation is simply not there.  (Microsoft is so far behind, their level of communication remains to be seen. And as of now, the only OEM they are really cooperating with is Nokia, which makes cooperation easier.)

Each company is entitled to whatever strategy they choose. But that strategy needs to get implemented correctly.  Right now, the numbers prove it is not.  One of the weak spots in the recent Google report was the lower revenue from mobile ads.  And while Google was giving away Android to make a couple of bucks from each device via mobile ads, Microsoft is collecting a steady stream of licensing revenue per Android devices sold and Apple's iPhone business became larger than Google and Microsoft combined.

I could go into a lot more detail about this (regarding the economics, tablet growth and the effect on developers, and more), but frankly, if Google wants more help, my email is in the About section.

I am looking to invest in Google, but I need to see a properly executed strategy. In the mean time, GOOG is a show me story.

Just an FYI... on an interesting note, Samsung is investing heavily in their own OS and ecosystem.  At least one other company may want to emerge as a true competitor to Apple.
Posted by echotoall at 5:40 PM