"Apple is another stock now that Steve Jobs has past, it is no Google." -Jim Cramer

LOL.  That is a sentiment change for Cramer. (When Apple was at 420 he was loving it. I guess we have to wait for it to be at 420 again for him to get pumped about it again.)  Not that I really care for an opinion made within a few seconds of time, but why compare it to Google?  Why say "its no Google"?

Make no mistake, I am a fan of Google, and its current momentum, but the market is currently ignoring very real threats to Google's prospects.  And I do not blame the market. Right now, the real threat is still in Beta and only in one segment of consumer electronics (iPhones).  Google has only $2.5B in mobile ad revenue. It can make up any slowdown there by placing more ads on its search result.

Google has a few prospects it is looking to reduce reliance on its core search:

(All other projects are nice, like the Google docs, and I use them extensively, but they do not dent the top/bottom line.)

The obvious concerns with Google are:

1. The affect of Android with the increase iPhone exposure to carriers. (Judging by the demand, a real dent can be made here.)

2. Google+ is interesting, but still at the 'interesting' phase. Case in point, next time you visit a popular tech blog, see how many "+1", facebook "likes", linkin "share" or "tweet" there are.  Twitter usually wins as a sharing mechanism, followed by LinkedIn share, then Facebook.  Google barely gets +1s.  I was a big fan of it in the beginning, but now it has to prove itself.

(I do not see obvious concerns for YouTube, other then massive competition.  But intense competition has always existed, and YouTube has done very well.)

The most destructive threat will be Siri.  Siri will be incorporated into all of Apple's future mobile devices, especially Apple's TV.  Envisioning Apple's TV does not take a genius.  Its a play off of the iPad.  Its an HD quality, very large iPad, with a special designation for TV related Apps. (The bloggers already see it, and its only a matter of time before the money managers actually apply their thinking to it.)  Anyone with an iPad can tell you, a set-top box is no longer needed to watch TV via your cable company. Cable's aggregation of channels is an App.  Each individual TV channels, if desired, can even bypass cable and be an App (like Netflix). Cable companies will simply provide the internet, and an aggregation of channels via an App. (Its already happening if you have an iPad!)

Now imaging your watching your Giant iPad, to watch the Giants beat the Patriots, and your wife asks you if you made dinner reservations for your anniversary next weekend.  I'll tell my TV to make dinner reservations, during a commercial break. (It is only a matter of time before Siri's API is open to all of Apple's Apps have the potential to be used via voice command.)

Your TV will become your main computing hub, along with your entertainment hub. It will obey your command, and give you answers to your questions. If it can't give you an answer, then it will give you search results.

Again, it does not take a genius to figure out how Google's core search business is affected by this.

So, yeah Cramer, current stock momentum favor's Google to see the 630 level. The technicals also favor Apple going to 423. However, product progression sure looks to be in Apple's favor.

I will be adding to my AAPL position once the CCI touches below -100.   The technical and product trends are still very much intact. 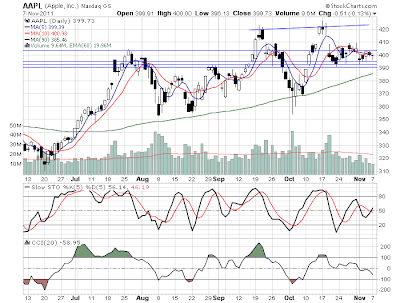 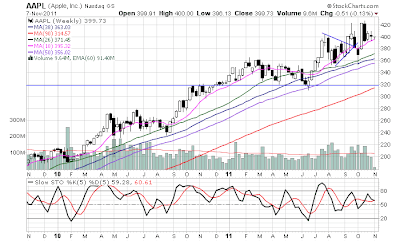