Its the same song and dance routine. The market is at an area where investors just don't know. 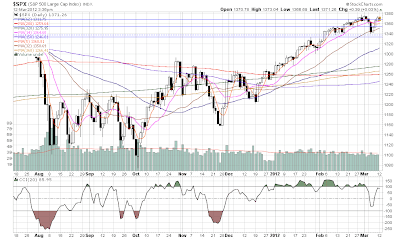 Everyone is waiting for a pullback, but what we are seeing today is consolidation. (Unfortunately for me, Oil related equities are acting like the industrials, and seeing a much heavier market reaction, despite the commodity acting fairly well throughout the day.)

From the above chart an argument can be made that there is a bearish breath within within today's market. This is further confirmed by the strength in the defensive stocks.

On the flip side, the 10yr yield looks interesting. It so desperately wants to breakout.

The support and resistance are pushing close to each over. IMO, if left on its own accord, it will push higher. But we have some Fed speak tomorrow, and that may alter its natural direction.

Despite the prudence, I really want to maintain my bullishness. The market has done nothing for a year, while earnings has risen.