A couple of days ago I wrote about a transition taking place within the market. If this thesis in correct, new SP500 price targets have to be established.  Ever since the March 2009 rally started, the market generally has been trading with a trailing multiple of around 14-15. (The exceptions to this come when the market feared a systemic issue, primarily the EU bank failures.)

If the market enters a period of a trailing multiple around 14-15, then the current market expectations are way too low. Below are graphs I created, from my models, to highlight SP500 target expectations with current SP500 eps estimates, and then a lower eps estimate.  Current EPS estimates are expected to grow about 8% this year. I took the liberty to reduces these estimates for a 5% growth expectation. (Even though current earnings have been pretty solid.)

Both charts show the eps for each quarter, and based on these estimates, along with a trailing PE of 14.4 and 15, a target range for the SP500 for each quarter.  The first chart is estimates only a 5% eps growth. The second uses current estimates. 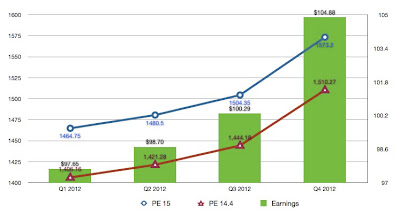 1. Historically, a trailing PE below 15 is low, and is discounting economic weakness. (North of 15, around 17 is considered 'rich'.)

2. The threat of bank runs have been squashed. (From America and EU.)

3. There are still plenty of worries to maintain a trailing PE below or near 15. For instance:

- a China hard landing (but the Chinese have a lot of tools to make sure this does not happen)
- more defaults from the EU (but with capital levels so high at US and EU banks, the market can handle country defaults)

Anything can happen tomorrow that can make the markets go down, but with a systemic financial collapse off the table, and earnings estimates fairly intact (thanks to global economic growth), the risk is to the upside.

If the US sees stronger job growth, hence stronger economic growth, the markets will continue to see multiple expansion, and the above PE assumption of below 15 maybe too conservative. (But that is dependent on the data, especially the jobs data.)

From a technical perspective, the SP500 is pretty over bought, along with key leaders (like Apple, IBM, banks etc). But we usually see multiple expansion with these type of very overbought conditions and bullish sentiment. These leaders, and the market, will eventually consolidate, but they will have created a new, higher, trading range in the process. (For the trading range, see above.) 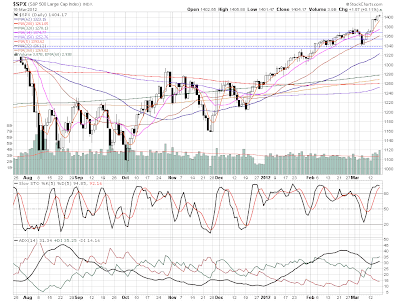 Posted by echotoall at 3:33 PM