ATI's performance over the few days has be frustrating, to say the least.  The obvious low-end support of 42.50 saw a breach, and now it is very oversold with negative sentiment. 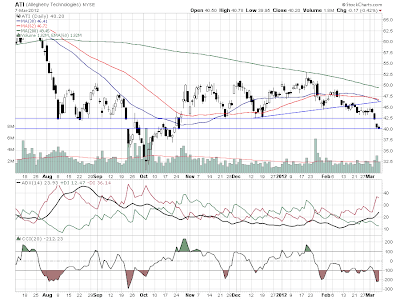 The interesting thing from this chatter was not the lower demand, but how the airlines will cope with the lower demand.  Obviously capacity will be reduced, but with oil prices to remain high, airlines are still placing orders for more efficient planes and removing older planes from the fleet. China East is an example of this. While they cancelled orders for the 787, they added orders for the 737. (The specific reason being China East's strategy shift to a more domestic focus flight schedule.)

Even though traffic demand looks weaker in 2012, orders are still being made and there is still a sizable backlog. (Especially when considering, the growth in airports in China alone.)

Due to the new technical setup with ATI, I will probably look to unload around 46. But I still think the fundamentals merit a stock in the 50s.
Posted by echotoall at 10:09 AM