ATI - Testing its low-end support, and oversold. With global PMI at 55, I just don't see a slow down in global GDP to hit the aerospace trends. There was some negative chatter regarding the aerospace boom a couple of weeks ago, but since then TIE (a company in a similar product space as ATI) stated the "industry has entered a sustained growth period". With out a recession and with continued aerospace demand, I still believe ATI is at least a $55 stock. 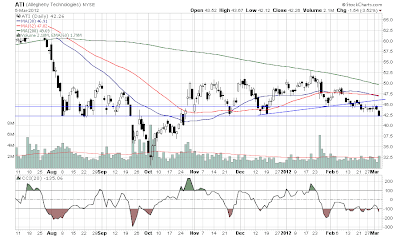 FIO - Love the story, just overbought. An entry may present itself around 28-29. 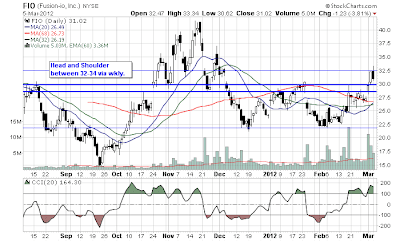 AAPL - What is there to say that everyone else does not already say? The obvious product presentation is the iPad 3. There are indications that iTV could be revealed as a 'one more thing' on March 7th.  We get that 'one more thing', stock could continue its push higher. If we get the obvious, we may consolidate.  Regardless, I doubt AAPL will go below 515-520. 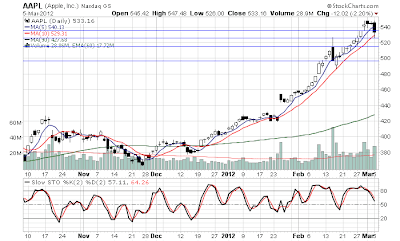 GOOG - The tech lagger.  If anyone thinks Google will stop dicking around in mobile, and properly utilize Motorola with all their offerings, then Google will catch up to the rest. If not, it will languish here until Apple eats their lunch. IMO, the current action is dictated by the market. Current levels seem interesting, but if the market keeps declining GOOG could see 600. If 600 breaks, it will see low 580s. I'm looking for an initial entry. I would have more conviction in this entry if they outlined a decent mobile strategy with Motorola, or if there was chatter indicating a decent strategy. (Instead we get bullshit 'firewall' rhetoric.) If Google did issue a reasonable strategy, the stock's lagging status will be removed, and it has the potential to see a 20% move. (And that 20% move is simply to catch up to its technology peers!)

Posted by echotoall at 8:54 PM