1 . AAPL - I am a pretty big fan of South Park and a big Apple-fanboy. Last weeks episode still made me piss my pants :)

Stock action should be interesting over the next few weeks now that the index re-adjustment is completed.  I still think there is plenty of growth in top and bottom line to easily justify a trailing PE of 18, Apple leadership does need to recognize better cash allocation.  Not because the street or some bullshit blogger (me :) wants them to, but because the situation makes a buyback in the company's favor. (I know they have an in-house former Goldman Investment banker, and hope he is at least suggesting it.)  Regardless, I will not consider selling AAPL until the 370s (at the least).

The longer-term trend suggests a steady move upward. IMO, the move may get toppy when the red line of the slow stoch pushed above 80. 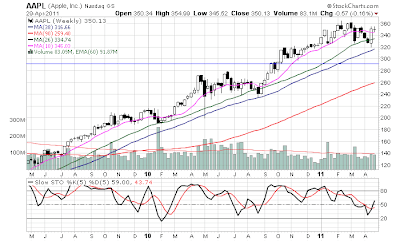 2. AOL - I plan on selling AOL when the red line of the Slow Stoch approaches 80. This should correspond to the stock hitting the downward trend line near 22. 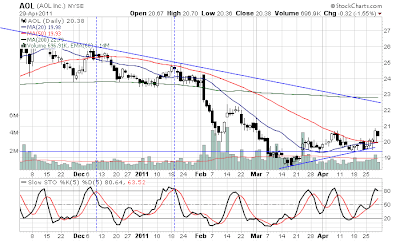 5. PBR - If Petrobras is forced to pay the $9.8B tax I will sell it, remove it from my watch list and use another stock as my oil play.  This smells like an attempt to use PBR like a piggy bank.  I already have a bad taste from the gov.-backed forced ousting of Vale's CEO (the CEO that made Vale what it is today).

I am a big fan of Brazil, their growing economy and prospect. But I do not like the increased level of interference. I just find it unacceptable. Because of this, I will not double down as I normally would have near 36. Now I am just waiting to see how this thing rides out. Kudos to the authorities for creating a new level of uncertainty that will further discount the stock. (If I have to sacrifice a position to enter another stock, now, PBR will be the first thing I sell.)
Posted by echotoall at 2:36 PM