A word on AAPL

An article was released today about AAPL being underweight by value funds.  I found that interesting because I had the perception that it was already owned by everyone via my AAPL valuation thesis.

The analyst who did the leg work discovering this info (Toni Sacconaghi) also suggested a sizable dividend to attract these value funds.  I completely agree with Sacconaghi.

The market stripped Apple's niche, high-growth, status though out this year.  While I believe Apple is still very much in a growth phase, the market has been doubting for months, reducing AAPL's trailing PE for a year.  Basically, everyone that wants to own AAPL for the current story, already owns it.

New buyers need new reasons. If the market breaks the current 1212 level, the market may test 1160-1180. Since a lot of stocks are predicated on market movement, that may lead AAPL to trade lower. (I was not expecting the market to break 1212, but with so much negativity, and the reactive nature of an SP downgrade of the sovereigns its a real possibility.)

I wrote about AAPL's technicals on Nov 10th, and I believe those words are still relevant.

1. During 2011 reduced-multiple trading AAPL capitulated when it was approx. 9% off the 90SMA 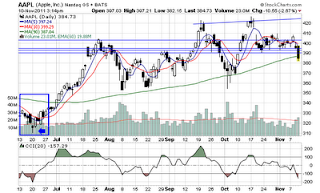 However, Apple's stock should not see 350 this go around. At low 350, AAPL will be trading with a single digit trailing multiple when backing out the cash.

The daily is tough to decipher at the moment, but the weekly shows a better trend and areas of support.

As a niche player, a company can easily ignore its share holders and investors, letting the company performance do the talking.  The problem with being a mega cap, its that speculators look at 'relative' performance, and if they see weakness, it gives them the evidence to make outrageous claims. (Like Cortez just did on the Half-Time report, that AAPL will see 300.)

The EU has inspired a market that will muddle along, making money managers think long and hard before purchases.  They see relative weakness, they will ignore a stock.  But giving a money manger a reason to purchase, like a nice dividend, relative weakness be damned, we will see AAPL trade in the 450s very quickly.