The benefit of CNBC is that it can project the mood of the big boys pretty well.  Since Apple missed analyst estimates, the stock has obviously not acted well. (Which is typical for a stock that misses analyst expectation.)

What a difference a day makes. Seriously.  Here is a chart: 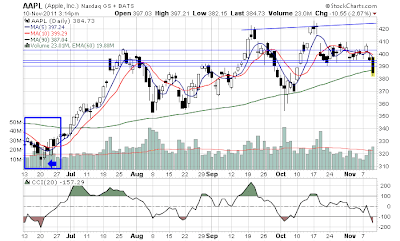 Two days ago, Apple was on the verge to charge higher. Look how nicely the price action was sitting just above the 5 and 10 SMAs. It was beautiful. But the next day, we got some intervention.  We got a bullshit report from DigiTime about the supply chain. (Extremely timely considering the technical set up. The motive is very suspect and obvious.) But separately, the rise in Italian debt margins hit the market.

Then, whoever issued the DigiTime report got lucky because the street started to openly chatter negatively via CNBC.  Further hitting the stock.  So whoever wanted to break the stock, won, today.

But now, AAPL is in a very curious position.  Its testing its daily support while trading with a trailing multiple below 14.

Given the chatter did not give a rats ass about valuation, at the moment, where can Apple be pushed to?

Within the above chart, I highlighted a box. The area in the chart represents Apple's capitulation from the last aura of negativity Apple faced. The key aspects of this area:

3. The 350 level is huge support. It is obvious support from the daily chart, but is also a trend support (50SMA) via the weekly chart that held up via the June 20th capitulation.

A few things could play out:

1. Apple will approach the 355-360 area. The chatter will drastically shift, we will see a capitulation, and the stock will rally from there.

2. Apple will see the 370 level, which is the first area of support via the weekly.  The 370 level also represents similar fundamental characteristics when AAPL was trading in June 20th. (I am sure at 370 chatter will begin to shift.)

3. It jumps from the 90SMA on the daily. (Considering the chatter and price action, the probability is smaller than the above two scenarios.)

Barring a blow up in Europe, all the big boys that want to out perform this market will suddenly realize how inexpensive AAPL is going into the holiday season. The question is, will they realize this now, at 370 or 355ish?

Regardless of this bullshit attempts to break the stock via rumors, it will be a 420 by the end of the year.
Posted by echotoall at 3:14 PM