I have been waiting on an opportunity on IBM for some time now, and it is starting to look interesting again.  The ACN and ORCL reports have taken their toll, and IBM has declined in sympathy.

Key take concepts from ACN and ORCL that are very relevant to IBM's businesses:

1. ACN stated that their EU biz was and will be affected by the EU situation.

2. A part of ORCL's results were hit by currency fluctuations. (IBM was hit with this in the past, so I expect IBM to see this headwind as well.)

Right now, we have to take what ACN and ORCL say at face value. But from previous reports, a strong argument can be made that IBM has been taking share. (About a year ago, IBM implemented a customer transition strategy for any potential customer to seamlessly transition to IBM services.)

Also, a few key differentiations between IBM and its competitors:

1. Financial engineering.  I mean that in a good way. IBM is by far one of the most shareholder friendly companies out there, and its buybacks/dividend support the stock.

2. Innovation. Their tangible advances support a better multiple then their competitors.

3. Consistent performance.  (This has a lot to do with #1, along with the nature of their businesses.)

4. Their leading positioning in web 3.0, big data, is firmly established. (Outside of the open source projects, privately held SAS is probably the best positioned for Web 3.0.)

I am looking to enter a position in IBM around mid 177, and adding to that position if low 170s are seen. Both the daily and weekly suggest the same support levels.  The daily does support a push to mid 177 before it gets really oversold. 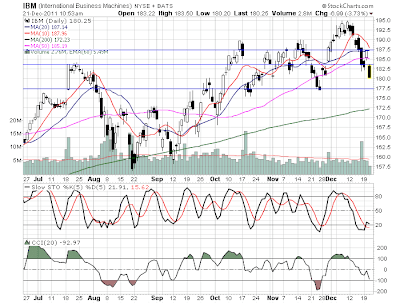 If IBM maintains a multiple of low 14, the stock should trade near 187 near their earnings report date.