The market is too overbought. 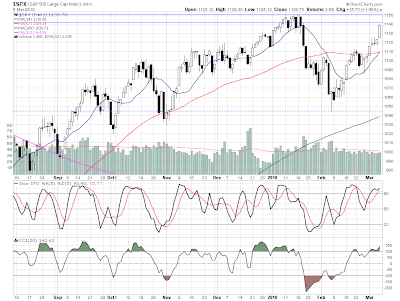 With the market move, and my new target prices for the stocks I am looking for, a market move to the 200 SMA maybe unrealistic right now.

Fundamentally I am a market Bull, and the market sold off harder than I thought it would Jan/Feb given the earning reports. Although I was expecting a consolidation in Jan, the market was completely detached from the fundamental story. If the market now starts acting normally with respect to earnings power fundamentals, the downward move to the 200 SMA will be postponed.

So I will most likely close out my market protection upon the current overbought consolidation, then stay heavy in cash and trade around the names of interest. Then utilize that cash when we get that solid downward move.

The piece of data that caught my eye on Friday was that Consumer Credit was improving. (video) This would mean normalized earnings power should be used to value banks. My favorite is JPM on a pull back. But the Volcker rule would seriously effect its overall biz, so a play not having the Volcker rule as a 'gray cloud' depressing valuation, WFC would be the purer play on the consumer credit improvement. I would wait for a consolidation from the overbought condition from both JPM and WFC. For WFC my entry would be 27-28. For JPM my entry would be 41.
Posted by echotoall at 1:30 PM