Below are some trades I am looking to take on. (Because not taking advantage of things I see,  sucks.)

AAPL is now looking to reach 420s quickly. Will look to play the Jan 2012 400 strike call if weakness is seen. (Normally I would have added at already on Friday, and would be riding the position to the 420s before unloading some.) 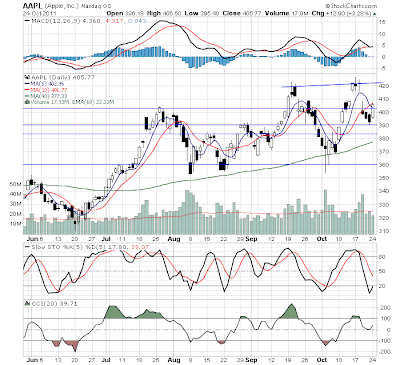 GOOG looks really interesting here.  Technically, it wants to test 620. Fundamentally, I do not know if it will get there just yet.  By year end, with a strong market, it can see 690 or so.  Normally, I would enter a very small position for the potential technical move. Right now I am looking for short-term market weakness to have GOOG test 584 or so, and will take a light position via the Jan 2012 600 calls. 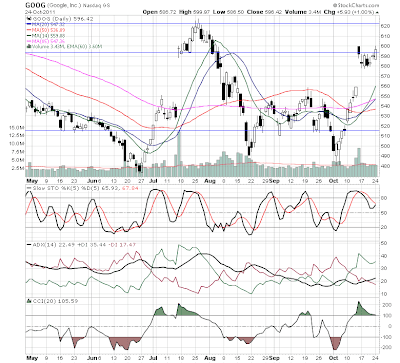 IBM seems like it wants to hick-up here, but given its consolidated state, I do not think the hick-up will be severe. Conservatively speaking, if IBM re-tests 176, I'm getting in the. If it consolidates near 180, I will enter with a solid consolidation. (It will be via the 175 or 180 Jan 2012 calls.) 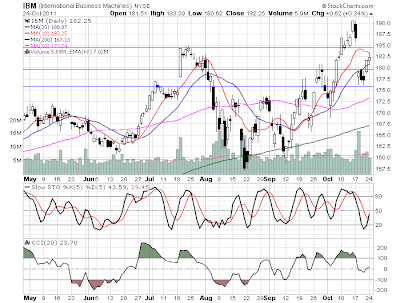 QCOM is consolidated and ready for the move to 57, as I previously highlighted.  If TXN's report causes QCOM to hick-up tomorrow, I will look to the 52.5 Jan 2012 calls.

SU is going to, at least 34, but since the technicals suggest 36, it will go to 36 by the end of the year.  WTI crude was near its current trading range in 2010-2011 when SU's upper trading range was 34.  SU has ground to make up. But when it does, the current chart would suggest it can go toward 36. I will look to play SU via the 32 Jan 2012 calls during market weakness. 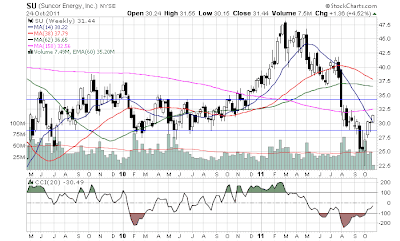