Over the weekend I will be posting a bunch of charts confirming the bottoming process highlighted below.

Optimism is currently hard not to contain. The bottoming confirmations give me a since of bullishness, as we are testing our 320 SMA resistance.

The VIX also shows signs of wanting to collapse. 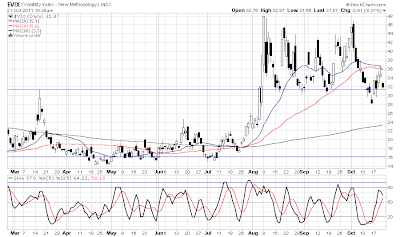 And the 10yr is very indicative of many stocks showcasing the bottoming of many individual stocks. With its strong move from the bottom, a base formation, that is shifting its overall trend. Its really pretty. :)

This optimism is obviously reflected with a strong up move today, so I am going to temper myself.  Throughout certain weakness, I would have been purchasing AAPL, IBM, QCOM.  If I was aggressive, some GS yesterday.  But with this optimism, I would have sold off on GS, and would be entering some 124 SPY Dec Put protection. (If trading, I would have entered it as certain technical conditions on the intra-day slow stoch, but since the opportunity was missed, I would take it on toward the end of the day.)  This would be just in case a 'sell-the-news' from the EU took place. (But would cover the protection shortly after the initial drop.)
Posted by echotoall at 10:52 AM