The fact that the VIX is elevated while the market is rising, imo, is very bullish for the markets.  It means the market is climbing the wall-of-worry.  (We must worry when the VIX is at very depressed levels. That would indicate complacency.) 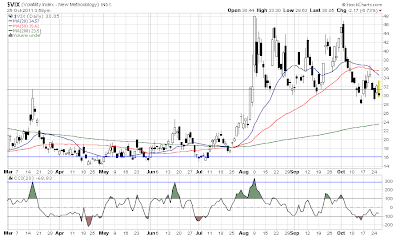 The VIX still suggests a credit fear, and that is a legitimate fear with out a definitive plan out of Europe.

The only time I worry about the vix:

2. If on particular days the Vix is up while the SP500 is up. (This could either be due to VIX index re-pricing or someone knows something and are protecting themselves. The VIX up/SP500 up only lasts for a day or two until the market reacts.  The most severe I ever observed it, was the week Lehman went under. It was up a few days in a row with the market, scared me so much that I sold all my positions except market shorts. That weekend we got the start of a US driven credit freeze.)

The above indicates everyone is already 'anticipating' a credit freeze. (As I highlighted months before, everyone was play a credit freeze before the actual credit freeze.)  But we already know, we will not get one, hence it is a wall-of-wary the market can climb.

Fear takes time to get washed out.  It took a year to flush out the fear from 2009.

The below was added the originally posted:

As the market re-captures the its 360SMA trend, it may consolidate before running.

In the short-term, the market may see a consolidation here. There is resistance above, and support below current levels. IMO, too difficult to gauge which way at current levels. The SP500 could base at the 360SMA, near 1216.

At the moment I am only in AAPL and QCOM. (Entry level positions waiting for my price points to be achieved, regardless of this market move, as highlighted in previous posts.)  I am waiting to enter SU on this anticipation of consolidation, was tempted today, but held off.  Google also tempted me today, as it declined to 573. (I held off, and if did play it, would have sold by the end of the day.)