During the violence of this overall nasty market, AAPL has been trading fairly well, allowing the stock to see an all-time high. Since its high, we have seen relative weakness due to an iPad production assessment, from a Chinese manufacturing sector analyst at JPM. With the current market condition we are in, and the type of strength AAPL has had, the trading dynamic of the stock has 'kinda' shifted. (I will explain why I emphasize 'kinda' below.)

Usually before a major announcement, AAPL rallies into an event, then 'sells-the-news'. Obviously this year is different. There has not been a rally into the announcement. And for all superficial purposes, the stock has looked pretty weak.

However, and this is where the 'kinda' comes in, if we look at AAPL vs the SP500 as of Friday's close, we will see Apple has made a higher low verses the market's test of the low-end channel. Whether anyone cares to admit it or not, that is strength. (We have see similar types of strength in other multi-national names like IBM, GOOG, etc.) 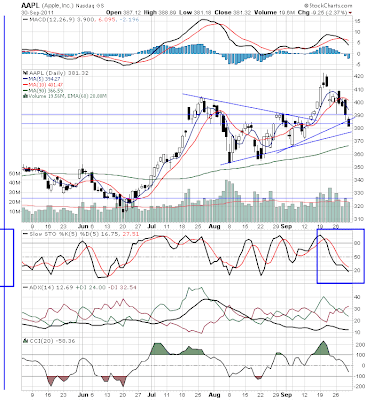 I have little doubt 6 months from now AAPL will be north of 450 because of accelerated EPS growth in relation to a low multiple base. But to highlight the global macro-economic conditions to show this is not the point of the post. The point of this post is to highlight the potential trading dynamic of AAPL during a time of extreme negative market sentiment.

Here are the observations:

1. AAPL has a bunch of support in the current area highlighted above, and with the relative strength, the supports provide areas for pops.

2. Looking at the AAPL chart above, at 405 there is also a potential Head and Shoulder formation. If, by some miracle, the market takes kindly to the very decent PMI number out of China, and causes a market to show strength, AAPL may test the 400-405 area. From a chartist's perspective, if 400-405 is not breached upward, then AAPL may stall and may chill in this range until it flushes out negativity.

We have see a similar type of flush out earlier this year, but with far more distinction. 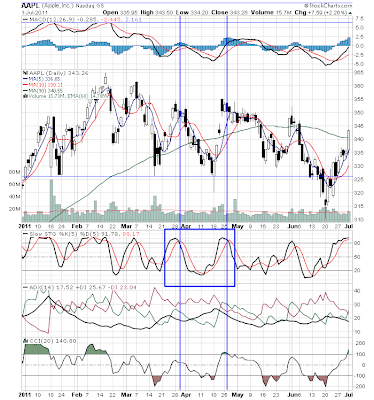 In this chart Jan 10th was one shoulder, Feb 14th was the head, and for 4 months the stock could not escape the Jan 10th shoulder area until it got so inexpensive that it caused a huge influx of buyers starting June 20th. The set up in 'box' area of both charts suggests we may see this.

Will the market place a single digit multiple on a company that has and continues to see drastic increase in device adoption (while its competitors have seen and continue to see drastic reductions), created new computer segments and still growing north of 15% over the next 5 years?

I do not know, but the above is to prepare just in case.

(Oh, and currently, when factoring in next quarters earnings and cash position, AAPL at 382 has a multiple of 10.5 on its business. Even though, AAPL, like IBM, still grew earnings during the 2008 severe recession.)
Posted by echotoall at 4:57 PM