AAPL - A couple of days ago I highlighted a technical note on AAPL regarding its potential break out. Today AAPL broke out. 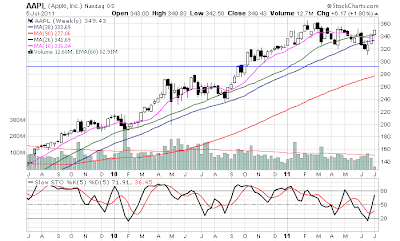 What I would like to see, as a sell signal, would be the red line of the slow stoch oscillator to go above 80. (But I still plan on selling some above 360 due to my forward PE assessment.)

POT - It is very near its negative trend.

The positive move today caused me to take my gains. However, the technical set-up, does suggest a potential to break the negative trend during this go around. (I may have sold too soon, but If it doesn't, and comes in, I will re-enter, with the expectation that the next move will breach the negative resistance.)

ATI - During the recent move I traded it as it was approaching the 64-66 resistance. With its push back from the resistance, I re-entered and am looking for ATI to re-approach 66 and breach it.  As the end of the year gets nearer, ATI should revisit its highs.

GOOG - I originally wanted to get into GOOG as it approached high 400s with a declining market. But I hesitated because I thought the pending Facebook IPO would cause fund managers to sell Google and enter Facebook. But the more I read about Google+ the more we begin to realize Google 'gets' social. And when looking at Google+ as the glue to many Google offerings, this is a very powerful combination that merits renewed interest in GOOG.  Technically, GOOG is shifting from its negative trend, and I am looking to actively trade it upon a consolidation.

I am hoping it consolidates around the current level, then push toward 570-580 level.
Posted by echotoall at 11:42 PM