The market is at its 1340 resistance area.

But its too easy to make a bullish or bearish argument, which is a nice way of shrugging the shoulders and saying I don't know :)

The earnings story has been overwhelmingly positive, with the specific exceptions some macro-economic indications (ie CAT). IMO, the positive earnings causes a positive sentiment toward an inexpensive market facilitating an upward bias. While the SP500 can move upward, the big-boys can use any area between 1340-1365 as an excuse to sell or consolidate due to its potential resistance.

The continued negative trend in the semis makes me think resistance will be seen. 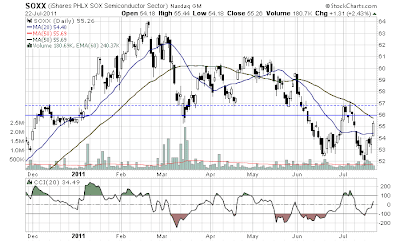