Obviously the market did not take too kindly to the non-farm payrolls, but after all was said and done, the market held its own and even showed a positive bias.

Supports held, and the SP500 bounced off its intraday low. Although the positive bias exists, there are multiple indications that the market will consolidate here.  The most obvious being the semis

The negative trend is still intact, and I do not know how much of a positive bias the market can have with out the support of the semis.

Combining these factors makes me think the market chills around here for the time being until a positive catalyst is presented.  I am hoping this set up will provide a nice buying opportunity for stocks that have been running.

Some trading thoughts with the current market set up...

1. POT may be isolated from this consolidation as it broke-out on Friday, with a very bullish undertone via the DMI. I am thinking it approaches mid 61 quickly. 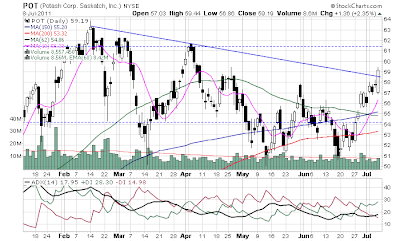 2. As advertised, I did unload some AAPL as it hovered at 360. I am thinking it keeps rallying due to its weekly chart set-up, and the fact that its growth is still grossly under appreciated by the street.  Apple is projected to growth Rev at some 40% is trading with an ex-cash multiple of 13.8! If the street wants to treat it like every other solidly growing company it should trade between 15-16. (If the street does this, AAPL will be trading at 400 within 2 months. If a China Mobile deal is announced, the street will give it a higher multiple, far quicker than 2 months.)

I will re-enter the positions I unloaded upon any, and I mean any, pull back.

3. After GOOG reports, it should trade between 530-580 over the next three months. (As per its trailing PE trading range, and affects of it 'getting' social.) I entered a very light position on Friday, with the downgrade. I will add to the near the low/mid 520s.
Posted by echotoall at 4:15 PM