ITRI looks to be gravitating down to retest high 45/low 46. 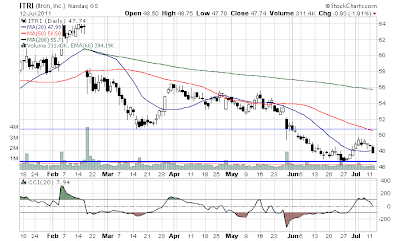 About two month ago I highlighted ITRI, and my interest in it due to the smart-grid deployment. (A few weeks later, I established a new target price of around mid 40s.)

Since my original post, the smart-grid standardization chatter has been getting louder. Most recently the Canadian Electricity Association has released its standards guidelines.  California has accepted the plans of its largest utilities. The National Action Plan Coalition issued its guidance.

Growth in this sector is only a matter of time, which IMO, is rapidly approaching. With a potential price decline, I will enter a common stock position in ITRI around low 46. (They report on July 26th, and I am not expecting a great report. If it takes a high from this report, I will add a second position.)
Posted by echotoall at 11:30 PM