In late November I posted about the potential 'aerospace' boom, and indicated ATI was my favorite play on it. Since then, ATI saw a new high for the year, and upon its consolidation I entered a position.

If a boom is measured via equity performance, a long-term look at the aerospace ETF (PPA) indicates this boom just started. (At least from an equity perspective.) 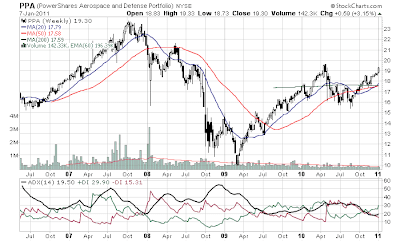 The equity performance is still trading within a consolidated base. This is not what we should be seeing from a 'boom'. A boom should suggest a rallying market. Albeit, the weekly DMI is suggesting very bullish action and via the daily chart the PPA appears to be rallying, but from a long-term perspective, it should be breaking from this base.

The fundamental knowledge that I know (stated in the previous posts), tells me this could mean the so called 'boom' is still in the very early stages.

If this assertion is correct, ATI looks good here.

ATI was consolidating for about a year before it broke out a few weeks ago. This recent break only adds to the argument of the so called 'boom in aerospace'.

On the short-term, ATI is roughly where I purchased it, but has tested one of its SMA supports. It looks good here for an initial position, and an additional position if it tests its 62 SMA.