The market obviously had a nice move the other day, bouncing off the 14SMA.

The only problem is, the short-term thesis regarding a sell of from the 10yr was waaaay off. The 10yr is hitting its low, despite the market move.

I do not know what to make of it. My over all longer-term thesis (stock are inexpensive in relation to global economic activity) is still in play. There are many stocks that are still inexpensive, and with solid global economic footing the estimated SP500 earnings of 87/share is going to be too low. But economic data will need to be present itself to convince the bond market other wise.

We will need to see a better than expected payroll number on Friday. Regardless, I am playing specific names, for specific reasons. Case in point, AXP. The third largest card processor, by a mile, did not settle. Personally, I can see why. There are 4 major card processors: V, MA, AXP and Discover. Visa and MA being the clear winners. Arguably a duopoly, although AXP has made great progress. Yet the DOJ is attacking the competition of the duopoly. Makes little sense to me, but I understand the DOJ's complaint is not about market share and about 'terms'.

As AXP declined, it became inexpensive with respect to the improving loan quality and technically has approached the bottom end of its trading range while being oversold. So I became interested. 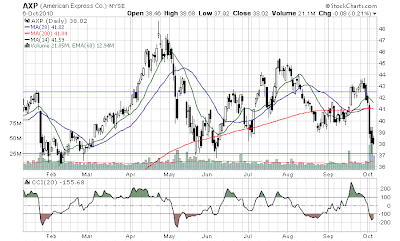