The intraday action indicated some near-term weakness. Technically, the 28/32 SMAs have not broken downward yet, but if they do, the trend is to hit the 62SMA.

The 62SMA on the daily is interesting because it also corresponds to the 14SMA on the weekly, which is proven support for the rally's trading dynamic.

So regardless of the intraday weakness that caught my eye, I think the weakness will be limited.

Many individual stocks are by no means over bought, some are lightly oversold. Basically, at the moment, they seem like they will go with the flow. 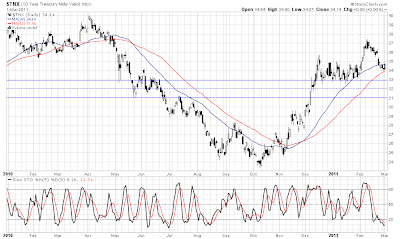 Market noise, caused by a feared slowdown in GDP, may bring the market to the 62 SMA. IMO, that level will bring already consolidated stocks to very oversold conditions. And I will be buying as indicated in the post below.

Despite my belief in the above, we always have to think of all the possibilities. An unlikely scenario, but one that plays off the fear of sustained +$100 oil, may bring the SP500 to the rally's long-term support, the 360SMA.

If the market heads toward this level, with out hints of the geopolitical assumptions, I will go all in.
Posted by echotoall at 9:53 PM