This past few weeks Citi was looking better and better each day. (good thing I called the break out :) And with each passing day I was waiting to see where the top-end range would be.

The amount of shares the gov. has to sell is too much to sustain a rally within C. Supply and demand will win, and the price will be capped. Today I believe indicated the cap. 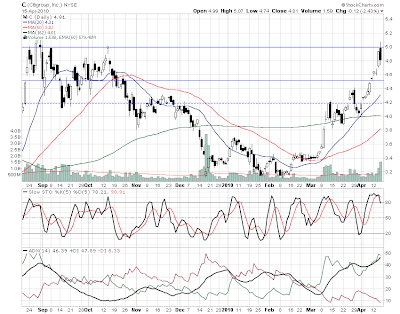 No question the stock is in a hugely bullish scenario, but it is very overbought. There is some solid resistance here, and with the supply coming on line, it may channel trade until the selling is completed.

(With trading volume in the billion, the selling should end sooner-rather-than-later.)

IMO, purely based on the activity that I see, I think MS has the green light to sell Citi north of 4.4 , which should cap the stock around 5.

I would like to maintain a core position when I anticipate the gov. selling has stopped, but we are probably a few months away.
Posted by echotoall at 7:37 PM